The Toyota Matrix and the Pontiac Vibe (which is a rebadged Matrix) are not pretty cars, but what if we told you that the Matrix XRS and Vibe GT were the closest things you could get to a Lotus Elise wagon?

Both the Matrix and Vibe were both based on the Toyota Corolla platform and manufactured in California as part of a joint venture with General Motors. The Vibe met its end in 2010 and the Matrix followed suit in 2014. Both were marketed as quasi-SUV station wagons but with SUV sales taking off and the Pontiac brand dying out, it didn't make sense for either to live on.

The Matrix and Vibe are practical yet unremarkable hatchbacks, great for carrying lots of stuff in a reasonably small package. Practicality is great, but there' a lot more to these cars than that.

From 2003 to 2005, Toyota sold a sporty version of the Matrix called the XRS and Pontiac has its own variant called the Vibe GT. Like the Corolla XRS, these two cars briefly used the same 2ZZ-GE four-cylinder engine first found in the Toyota Celica GT-S. Why is this important? Well, the 2ZZ was such a great engine, it later went on to be used in the Lotus Elise and Exige. That's right, these two cars are basically Lotus wagons.

These two cars may share a remarkable engine, but there isn't much else special about them. This is good news for you because it means you can pick up a Matrix XRS or Vibe GT for next to nothing. Neither car is particularly easy to find in good condition, given the vast majority of Matrix and Vibe models sold were the non-sporty variants and the ones we want were built for just a few model years. But if you do manage to stumble upon a well-kept example, expect to pay anywhere from $2,000 up to $5,000. If you do find a unicorn with less than 100,000 miles, consider paying more.

It's all about that 2ZZ engine. Whereas most versions of the Matrix and Vibe used a 1.8-liter four-cylinder 1ZZ-FE from the Corolla producing 130 horsepower, the 2ZZ produced a much livelier 180 hp. We know that still doesn't sound like much but keep in mind that the Matrix XRS only weighed around 2,790 pounds (only around 268 pounds more than the Celica), so it could hit 60 mph in 8.9 seconds. The 2ZZ was not a powerhouse by any stretch of the imagination but it produces 100 hp-per-liter without any forced induction.

The engine featured a dual camshaft profile system called VVTL-i, which works a lot like Honda's VTEC system. And like a VTEC engine, the 2ZZ's high-output cam profile did not activate until around 6,200 rpm, meaning you had to rev the hell out of it to get any power. Get ready to enjoy revving the engine out to its 8,000 rpm redline as you shift gears on the optional six-speed manual transmission. A four-speed automatic was also offered but is not recommended.

As Lotus later found out, this engine can produce around 240 hp with the addition of a supercharger. So if you want to build a faster one, it can be done.

Both cars share an unremarkable interior filled with early 2000s plastics and basic technology like manual climate controls. At least they both have a cool steering wheel, a manual shifter, and sporty gauges. These cars were also built during a time before infotainment was a trend, so they feature easy-to-remove radios that can easily be replaced with a modern head unit.

As we mentioned, these cars may have the engine out of a Lotus but there's nothing Lotus-like about their practicality. The rear cargo area houses 21.8 cubic feet of space, which opens up to 53.2 cubic feet with the rear seats folded. And unlike most hatchbacks, the cargo area is plastic rather than carpeted integrated rails with tie-downs. Even the front passenger seat can be folded down to accommodate larger items like a surfboard.

Despite being used in a Lotus, the 2ZZ engine was still pretty economical in its non-supercharged guise. With the manual transmission, the Matrix was rated at 22 mpg in the city and 29 mpg on the highway.

Though they don't look like enthusiasts cars on the outside, the Toyota Matrix XRS and Pontiac Vibe GT pack the heart of a sports car. Both are inexpensive to buy and feature Toyota's legendary build quality, making them an excellent first car for an enthusiast on a budget. We know you will have fun from the moment you shoot past 6,200 rpm on the way to the 2ZZ's glorious 8,000 fuel cutoff. 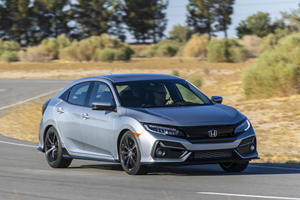