The fine isn't always relative to the speed achieved.

Few of us make it through life without a speeding ticket. At this point in time in America, it should probably just be classed as another form of road tax. But, depending on the state and country, that fine can vary a lot and get very expensive. Don't, for example, get caught speeding in Finland. Their fines are income-based and as you'll see, that means if you can afford a Ferrari then you're going to get an eye-watering ticket. Here in the US, Virginian residents have faced insane fines of over $3,000 since legislation in the mid-2000s.

There's a little argument over the first speeding ticket ever issued. In 1899, a New York taxi driver named Jacob German was thrown in jail for going over the 8 mph speed limit on straight roads and 4 mph around corners in his electric car. According to the cop that threw him in jail, he was traveling at a public endangering... 12 mph. However, there's no record of a ticket being issued.

That honor goes to Dayton, Ohio, resident Harry Myers who was written up for doing the same criminally insane speed on a public street. Since then standard fines have increased along with attainable speeds and there have been some immense speeding tickets for some very unlucky drivers.

In 2006, the BBC reported on Businessman Ronald Klos hitting 156 mph in his BMW while talking on his cell phone. According to Fife Constabulary in Scotland, this was the highest speed recorded by their speed cameras. In this case, we certainly don't condone his behavior but we do approve of the car he was driving. Klow was at the wheel of BMW M3 CSL. The fine was £3,000, or around $4,000 at the time, and he was banned for a year.

In the same year, a British Porsche 911 driver got hit with an $8,000 fine for touching 172 mph on a back road, but his fine had been doubled as they threw the book at him for dangerous driving as well.

Canada tends to have fairly high fines for speeding, and $1,000 isn't a rarity. In 2010 though, a Canadian motorcycle enthusiast caught himself a bank balance denting $12,000 fine as part of the negotiation for him to keep his license. If you're Canadian or plan on visiting Canada, it's worth remembering that in Ontario fines can reach $10,000 and in Alberta, it's theoretically possible to clock up a $25,000 fine.

A British tourist visiting Dubai managed to rack up $47,000 in tickets after renting a Lamborghini. In 2010, the Brit hit 150 mph on Sheikh Zayed Road. The next day he was caught by every single radar on one road several times and was fined for a total of 12 violations. Although this isn't a single ticket, $47,000 is an astounding fine that was then topped off by the $28,585 cost of recovering the car after it was impounded.

In Finland, the sliding scale of speeding fines is linked to the income of the perpetrator. The idea is that the rich don't get to just break the laws because it just costs them inconsequential amounts of money to walk away. In this case, businessman Reima Kuisla managed to catch a mind-bending $60,000 speeding ticket for going just 14 mph over the speed limit. Kuisla was caught doing 64 mph in a 50 mph zone, and when authorities looked at his tax return, they did the math on his $7m income and came up with 54,000 euros as his fine.

An interesting note here is a director of the Finnish telecommunications giant Nokia caught a $130,000 fine in 2002 but managed to reduce it by proving that his income had dropped and he wasn't getting the same share options as noted on his last tax return.

At one point in 2013, Anders Wiklöf held the Nordic record for a speeding ticket before the Nokia executive beat it. In 2018, Wiklöf took another run at that in his Bentley while running late for a prize ceremony. He was caught doing 71 kph in a 50 kph zone, and fined the equivalent of $71,000 for doing so. It really goes to show that in Finland, 21 kph over the speed limit is a very expensive proposition for someone that owns a bank.

Australian laws are harsh when it comes to what they call "Hooning." In this case, the Australian millionaire had his $200,000 Gallardo confiscated despite the fact he wasn't actually driving it. His mechanic had taken it out for a joyride and managed to get himself clocked by the Aussie boys in blue in a 43 mph zone doing 99 mph. According to reports, the Gallardo owner did get his ride back eventually.

I think we can safely say Finland is not the ideal home for the car enthusiast. One of the richest men in Finland, and 27-year-old heir to a meat-packing empire, got himself caught doing 50 mph in a 25 mph zone in 2004 and earned himself the $217,000 fine against his €7m a year income.

Switzerland also uses the driver's income to work out the fine, and this multi-millionaire was a repeat offender. The Swiss government looked at his Ferrari Testerossa, then his $22m income, and figured $290,000 would be enough of a punishment. That actually doubled the previous Swiss record set by a Zurich based Porsche driver in 2008.

If you want to hear a hard-luck new car story, this is brutal and ends with the biggest speeding ticket recorded to date. The 37-year-old Swede had taken delivery of his brand new 2010 Mercedes SLS AMG in Germany and was driving it home when he was clocked by speed cameras doing over 200 kph (125 mph).

The police knew he was doing over 200 kph because that was the limit on their measuring instruments. Further down the road, the Swedish cops had the current generation of radar detectors and caught him at near 300 kph (187 mph). When pulled over, the driver told police, "I think the speedo on the car, which is new, is faulty." Of course, it wasn't and he was fined just short of €789,568, which at the time was staggeringly close to $1m dollars.

In 2010, Michel Perridon, the director of Trust International BV, loaned his son the first Bugatti Veyron imported into Holland. Seizing vehicles is quite a common form of punishment in Holland, and Perridon's son managed to get spotted doing 100 mph in a 50 mph zone in Rotterdam. It's not known if Perridon managed to recover his Veyron, but we certainly hope so for the son's sake. 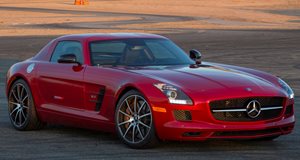