This particular car was expected to sell at Monterey Car Week, but for some reason, it's reappeared for sale.

A one-of-a-kind Ferrari F40 "Competizione" has reappeared for sale via RM Sotheby's in a private sale. Chassis #80782 was offered for sale as part of the famous house's auction at Monterey Car Week earlier this year, but for unspecified reasons, it's now available again. We doubt that anyone would sell such a special machine so soon after acquiring it, which leads us to believe that the hammer didn't fall on this particular vehicle in August.

But we're pretty confident that it will find a loving home soon, as this is quite possibly the fastest F40 ever made, with between 700 and "near" 1,000 horsepower, depending on setup.

The listing states that this early model was delivered new to an official Ferrari dealer in Holland and underwent a professional conversion to full Competizione spec in 1993 by Cavallino Racing. Thereafter, this car competed in the Ferrari/Porsche Challenge series. G-Tex in the UK did further development work in 1995 in collaboration with Micelotto, a famed racing outfit, to keep the car competitive. Finally, it underwent cosmetic restoration to its current look by the Zanasi Group in Maranello, which is the official factory paint shop for Ferrari's most exclusive models, including Tailor Made bespoke customizations and Icona cars, like the Daytona SP3. This is also the shop that painted the world's only factory matte black Enzo. The look you see here includes a three-layer Grigio Nardo paint job, which translates as the iconic Nardo Grey finish.

Basically, this is a very special creation that mimics the spectacular F40 LM GT and GTE racing cars, and it followed not only their styling but their competitive endeavors, too, with this example racing until 2006. That cosmetic restoration we touched on above ensured that the car was brought back to the finest standards, with work at Zanasi totaling more than €123,000, or almost $129,000.

As for what it could sell for, we dare not hazard a guess, but we suspect that it will go for more than a regular F40 and less than an original LM or GTE. Then again, it's a one-off, so the price could well exceed all estimates. Currently standing in Culver City, California, where will it find its next home? 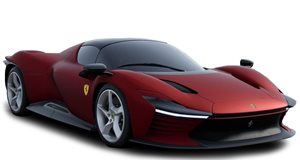