1979 Mercedes-AMG Wagon Is The Perfect Sleeper

Buy this early AMG wagon at auction and they'll never see you coming.

See this wagon? It's an S123 – the precursor of today's E-Class, and stretched-roof counterpart of the W123 sedan (and V123 limo and C123 coupe) that Mercedes built in the 1970s and 80s. But it's not just any Benz wagon. Though it's all murdered out in classic "sleeper" style, if you look closely enough (or stand far enough back) you'll probably be able to tell that this particular S123 is packing a secret or two.

What you're looking at is a 1979 Mercedes-Benz 500 TE AMG, and it's coming up for auction in Germany next April.

Daimler offered the 123 series with a variety of gasoline and diesel engines, with four, five, or six cylinders, and displacing between 2.0 and 3.0 liters. But even the most potent of them only produced 182 horsepower and 173 lb-ft of torque. That's less than even an entry-level CLA 250 churns out today, and it's where AMG came in.

The venerable Mercedes tuner had just started operating a dozen years prior and wouldn't be acquired by Daimler for another 20. In between, it made a name for itself upgrading existing Benzes like this one, apparently packing a 5.0-liter V8 good for 276 horsepower.

In modern terms, that's still down almost a hundred horses on today's Mercedes-AMG CLA 45, let alone the 603 hp kicked out by this vehicle's modern counterpart, the E63 S . But it was nearly a hundred horses more than Mercedes offered from the factory – and more than the original Porsche 930 Turbo offered at the time. Add to that the upgraded body kit, rolling stock, suspension, and Recaro buckets, and you're looking at a wagon transformed – and one they'll likely never see coming. Place the winning bid at RM Sotheby's Techno-Classica auction in Essen and it could be yours. 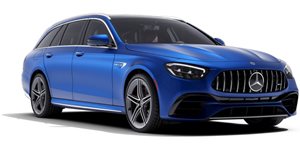 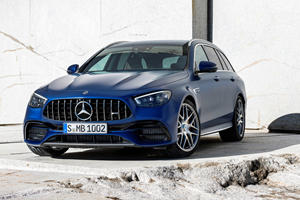