2004 Maybach Covers One Million Miles and Then Some

Liechtenstein businessman Josef Weikinger bought his Maybach 62 back in April 2004 – when it was one of the finest cars on the market and gave Rolls Royce a run for its money. The now-defunct model, which is to be replaced by high-end variants of the Mercedes-Benz S Class, was purchased by Weikinger and used extensively until August 2013. So extensively, in fact, that the car's logbooks detail many hard driving days with a total mileage of over 2,500km on some.

Weikinger drove the car (yes - he mostly drove himself) so much and so far, that he eventually ran out the odometer's 999,999 miles back in September of 2009. The Maybach's original twin-turbo V-12 engine, however, didn't make it that far: it was replaced at (a still impressive) 600,000 miles, followed by a new transmission and front shocks two months later. Weikinger traded in (and down, perhaps?) his 62 for a BMW 760Li in August 2013, but the Maybach is still being driven by its current owner.

We Drove The Land Rover Defender From James Bond's 'No Time To Die'
Source Credits: auto-motor-und-sport.de 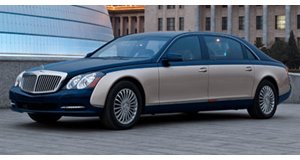