BMW is getting ready for a busy Detroit Auto Show.

The North American International Auto Show serves as the stage on which most automakers display their latest wares and bid to outdo their competition. Word has come in that BMW is showing up at the 2012 Detroit Auto Show with two new models, the 2012 BMW ActiveHybrid 3 and an M6 convertible. BMW previously showed-off their twin-turbo 4.4-liter V8 setup at the Frankfurt Auto Show earlier this year, sitting inside the M5.

The same powerplant tweaked for a skoshe of extra power should be making its way into the M6 convertible. It should feature a seven-speed dual-clutch transmission. A rumored six-speed manual gearbox could be made available for the U.S. market. The ActiveHybrid 3 for 2012 will run on both a 300hp 6-cylinder engine complete with the German automaker's TwinPower Turbo tech and a 55hp electric motor. It is paired to an 8-speed automatic transmission. Total output of the two engines combined are 335hp and 330 lb-ft of torque. It features both an EV range of 2-2.5 miles and a boost function to give the sedan a bit more oomph. 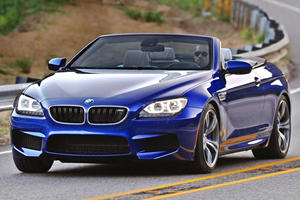