The Verano luxury sedan is anything but just luxury.

Buick has released their 2013 Verano Turbo with more than just luxury in a sedan. The powerful Verano Turbo packs a 2.0-liter Ecotec engine with 250hp and 260 lb-ft of torque for a quick ride while you sit in the lap of luxury. The 2013 Buick Verano Turbo, set to hit the U.S. market later this year, can sprint from 0-60mph in 6.2 seconds and is efficient as well. The engine, available with either a six-speed automatic or manual transmission, gives the sedan a bit more personality than anything we have seen before on the four-door model.

As the 2013 Buick Verano Turbo nears its launch later this year we should have more details on performance, efficiency and pricing. Until then, enjoy the American company's recently released photo gallery of their latest performance sedan. 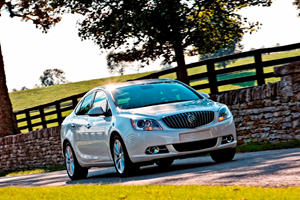