Buick has priced new model well below its predecessor.

The redesigned second-generation Buick Envision was revealed last spring and it's a far better-looking vehicle inside and out than its bland predecessor. Buick's latest design language combines elegance with a more aggressive appearance as it aims to lure in a younger crowd. Already, the new Buick Encore GX is doing this task brilliantly. As for its larger Envision sibling, Buick has also found another way to make it far more attractive than before: pricing. Not only have the trims been simplified, but pricing has also been slashed.

CarsDirect got a hold of a dealership order guide and has confirmed with the brand that the 2021 Envision will carry a starting price tag of $32,995 with destination. The base-level Envision Preferred, to compare, is $1,700 less expensive than its 2020 equivalent, which began at $34,695. The mid-range Essence trim's price remains unchanged, beginning at $36,995.

And then there's the top-of-the-line Avenir with available all-wheel drive. As a replacement for last year's Essence II trim, the Avenir AWD ($43,195) is now the most expensive trim available, though it's $1,600 less than the Essence II. The Envision Avenir FWD starts at $41,395. According to a Buick spokesperson, "The All-New Envision will offer a more simplified lineup with lower price points and provide three unique exterior appearances to broaden it's appeal."

Buick has clearly done its pricing homework because the 2021 Envision's starting price is less than some of its most significant rivals, specifically the Lincoln Corsair ($36,940) and the hot-selling Acura RDX ($39,225).

Buick typically offers many incentives that will lower the price even more. While the simplified lineup and price reduction are very much welcomed, there is one drawback: the engine. For 2021, the Envision has only one engine option, a 2.0-liter turbo-four rated at 230 horsepower. Last year, the optional 2.0 turbo churned out 252 hp. Could Buick later offer a more powerful upgrade? Of course, and the engine we have in mind is the 3.6-liter V6 with 308 hp paired with a nine-speed automatic transmission, a combo also found in the Chevy Blazer. But one thing at a time here. A price cut for a completely redesigned and much-improved successor is a significant thing. 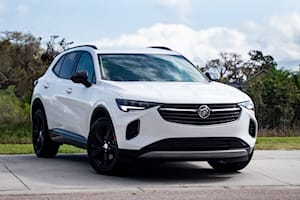