2021 Kia Stinger Reported To Get A Major Power Increase

This is great news!

The rumor mill surrounding the facelifted 2021 Kia Stinger has been turning fast. Kia has been spotted testing a camouflaged prototype of the facelifted model, likely hiding some minor exterior changes, interior upgrades, and some new updates under the hood. The Stinger's 2.0-liter turbocharged four-cylinder is rumored to be replaced by a new 2.5-liter unit while the 3.3-liter twin-turbo V6 is expected to remain albeit with some updates.

Now, The Korean Car Blog claims to know the exact output figures of the 2021 Stinger from the South Korea Ministry of Environment. The Stinger's new 2.5 T-GDI engine will reportedly produce 304 horsepower and 311 lb-ft of torque and come mated to an eight-speed automatic transmission.

This would be a major increase over the current 2.0-liter mill, which produces 255 hp and 260 lb-ft of torque. The new 2.5-liter engine is also slated to be used in the upcoming Genesis G80 and GV80 while a de-tuned version will appear in the Kia K5 GT and Hyundai Sonata N-Line. Kia will reportedly offer the four-cylinder Stinger model with rear- or all-wheel-drive. We expect this new engine to drop the Stinger's 0-60 mph times significantly.

As for the Stinger GT model, it too will receive a power increase. Output from the V6 engine will reportedly go from 365 to 373 hp. Torque output is not mentioned. We're not sure anyone will notice the difference but it's a step in the right direction.

Kia will also equip the Stinger with a variable exhaust system for the first time ever. This should make the car sound better under acceleration. Other likely changes include revised headlights, new bumper designs, and a new wheel pattern. Inside, the Stinger is expected to receive some tech upgrades in the form of a larger 10.25-inch touchscreen. We expect Kia to reveal the facelifted 2021 Stinger in a few weeks' time. 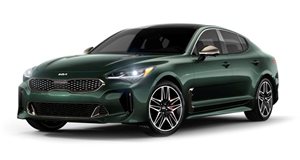 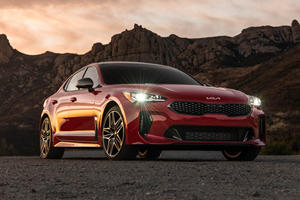