Mercedes-AMG has announced a new addition to its range of performance SUVs, and this is a real brute. The 2021 Mercedes-AMG GLE 63 S introduces phenomenal power outputs into the mid-size SUV segment, just as the ML 55 AMG did 20 years ago.

Times have changed, however, and the new GLE 63 S produces 603 horsepower and 627 lb-ft of torque, with an EQ Boost starter-generator adding another 21 hp/184 lb-ft. It will hit 60 mph in only 3.7 seconds. That's staggering performance for a large, luxurious, and family-friendly SUV, and the GLE 63 S must be hungering for a battle with the BMW X5 M (and especially the Competition). With no 'regular', non-S GLE 63 in sight, it appears that Mercedes is increasingly prioritizing the most powerful S AMGs since most buyers at this price level are probably choosing them anyway. Already, this SUV's coupe counterpart - the GLE 63 S Coupe - lacks a lower-powered 63 version.

The GLE features the AMG Performance 4Matic all-wheel-drive system with fully variable torque distribution, along with an AMG Speedshift nine-speed automatic transmission. An electronically limited top speed of 174 mph is attainable if you're willing to risk it all. The advanced electrical system represents the next technological leap for Mercedes' halo performance SUVs. "For the first time, we are electrifying our well-proven 4.0-liter V8 bi-turbo engine with an EQ Boost starter-alternator and a 48-volt electrical system," says Tobias Moers, Chairman of the Board of Management of Mercedes-AMG GmbH.

"As such, we are embarking on another new chapter of our drive technology, which we are also successively extending further to other model series' as we move towards electrification and hybridization." Considering the increased responsiveness and fuel-saving benefits of the new powertrain, the new AMG GLE 63 S seems to offer the best of both worlds.

With great power comes great responsibility, and AMG has ensured that the most powerful GLE's suspension, steering system, and high-performance brakes are capable of harnessing all that energy. Standard is an electronically controlled locking rear differential, guaranteeing maximum grip and limiting slip at the inner wheel during turns. The AMG Active Ride Control system uses electro-mechanical actuators at both the front and rear axles, compensating for body movements and improving handling capability, even at the AMG's high limits.

With AMG Dynamic Select, drivers can choose from several driving modes ranging from Comfort to Sport+ and even Sand when encountering loose, sandy terrain. The GLE 63 S also has a special Race mode for use on closed circuits.

The usual AMG addenda apply inside and out, with the 63 S getting mean-looking 21-inch alloy wheels. Dual 12.3-inch screens, Mercedes' latest MBUX system, 64-color ambient lighting, heated and ventilated front seats, and fine Nappa leather upholstery make this speedy SUV comfortable enough for the daily haul. There's also no shortage of Mercedes' latest driver aids, with standard kit including Pre-Safe, active parking assist, blind-spot monitoring, and active brake assist. Pricing is still to be announced but the GLE 63 S will arrive at US dealers in mid-2020. 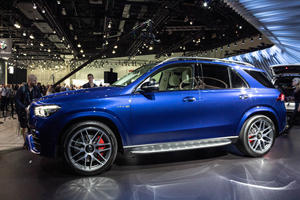 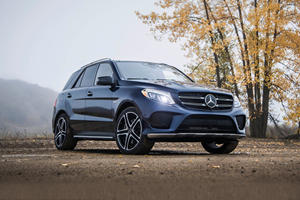 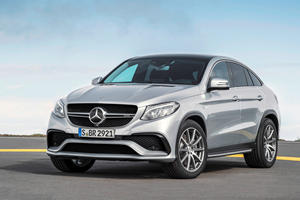