The Mercedes-AMG GT 63 S has been defeated.

Last month, our spy photographers caught a mysterious Porsche Panamera Turbo being put through its paces at the Nurburgring, reigniting rumors that Porsche is attempting a new lap record at the famous German racing circuit. But now it's official. Ahead of the car's debut, Porsche has announced a camouflaged series production version of the updated 2021 Porsche Panamera Turbo lapped the Nurburgring in seven minutes and 29.81 seconds, setting a new lap record for executive cars. This was faster than the Mercedes-AMG GT 63 S, which lapped the circuit in 7:30.11 seconds.

"The enhancements made to the chassis and the powertrain of the new Panamera were always noticeable during this lap on what is recognized as the most demanding race track in the world," said Porsche test driver Lars Kern.

"In the Hatzenbach or also Bergwerk and Kesselchen sections in particular, the new setup of the electromechanical roll stabilization system PDCC remains consistently effective and provides the Panamera with incredible stability in spite of the bumpy track surface. At the Schwedenkreuz, the car benefited from the improved lateral dynamics and the increased grip of the new Michelin UHP tires. I achieved cornering speeds there that I would not have believed possible with the Panamera."

With test driver Lars Ken behind the wheel, the record lap was completed on July 24, 2020. The only modifications made to the record-breaking Panamera was a racing seat and a rollcage to protect the driver. Michelin Pilot Sport Cup 2 tires developed specifically for the new Panamera were also fitted and will be optionally available when the car goes on sale.

To show how the new Panamera Turbo has evolved, Porsche also recreated the original car's lap to see how they compare. The original Panamera Turbo's lap record time of seven minutes and 38.46 in 2016 covered a distance of 12.8 miles when lap record attempts didn't include a 656-feet section of track that was used as a public entrance. New regulations now require lap times to cover the entire 12.9-mile Nordschleife distance. 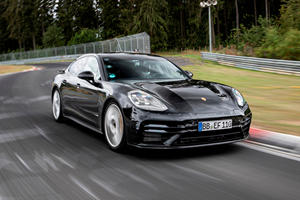 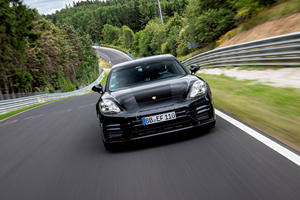 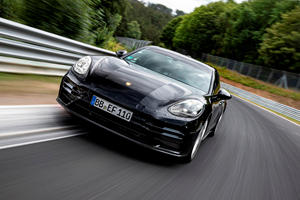 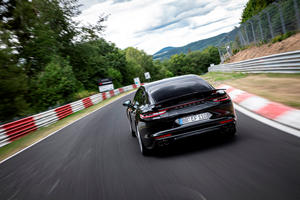 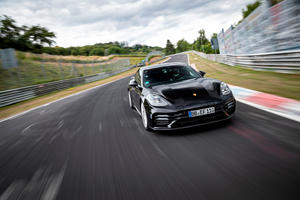