2021 World Car Of The Year Finalists Will Make Americans Jealous

Many of the top contenders aren't sold here.

The World Car of the Year is among the most prestigious awards a vehicle can win. Last year's winners were supposed to be announced at the New York Auto Show but were moved online due to the pandemic. Despite not being sold in several important markets, the Kia Telluride took home the coveted World Car of the Year award. The other awards went to the Kia Soul EV for Urban Car, Mazda3 for Design of the Year, and the Taycan for the Luxury Car and Performance Car categories.

This year's awards have been a long time coming, but the top three finalists in each category have been announced. There are 15 available spots held by 10 different models. A whopping seven of the 15 spots are held by Honda and Toyota. Aside from those two, only the Land Rover Defender holds more than one, capturing two.

The top three finalists for World Car of the Year include the Honda-e, Toyota Yaris, and Volkswagen ID.4. Of these three, two are fully-electric vehicles, and only one, the ID.4, is offered in the United States. The finalists for World Urban Car look pretty similar, with the Honda-e and Yaris making their second appearances and the Honda Jazz (also known as the Fit) taking the ID.4's spot.

For the World Luxury Car category, the finalists change significantly with the aforementioned Defender, Mercedes-Benz S-Class, and the Polestar 2. The World Performance Car finalists include the Audi RS Q8, Porsche 911 Turbo, and the Toyota GR Yaris, which has received incredibly high praise as one of the world's best driver's cars.

Finally, the World Car Design of the Year finalists include two aforementioned models, the Honda-e and Land Rover Defender, plus the Mazda MX-30, which is coming to the US market at some point. The winners of each category will be announced on Tuesday, April 20, 2021, decided by 93 distinguished international automotive journalists using a secret ballot. 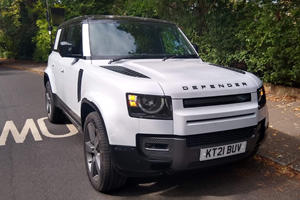