What about the hybrid option?

Forget about half what you previously knew about the upcoming Lotus Lambda SUV, due to hit the road before 2022. The project dates back to 2016 before Lotus was acquired by Chinese automaker Geely, who also owns Volvo and Polestar. But since Geely's acquisition of the Hethel, UK-based sports car company, there's been significant investment to turn the once struggling Lotus around. And the fastest way to do so is an SUV. But here's the thing: that SUV was initially supposed to offer both hybrid and all-electric propulsion. Not anymore.

Autocar claims that Lotus will drop the hybrid (specifically a plug-in hybrid setup) completely in favor of a pure battery-electric SUV.

The reason is the current momentum of fully electrified SUVs coming to market, a trend that will continue to grow in the coming years. Why bother investing significant funds into a hybrid powertrain that's expected to see a demand decrease? The EV market, especially in China where the Lambda is expected to be built, continues to grow. Around 1.2 million EVs were sold there last year alone.

The Lambda will be Lotus's volume model from the get-go while sports cars, including a new Lotus Exige and a reborn Esprit with a V6 hybrid setup, will continue to sell in significantly lower numbers. But don't think for a moment the all-electric Lambda will be a downgrade from the now-deceased hybrid option. Quite the opposite, in fact. The new report suggests that the base model will feature a dual-electric-motor setup good for nearly 600 horsepower.

But the real treat is going to be the fully-loaded quad-motor 750 hp variant. Its torque figure is expected to surpass 1,000 lb-ft. To compare, the Tesla Model X Performance boasts two electric motors for a total of 778 hp and 841 lb-ft. It also costs about $100,000, so it's a fairly good bet the Lambda flagship will have a similar price tag.

Lotus is also aiming for at least a 360-mile range, which already surpasses the Model X Long Range's EPA-rated 328 miles. The Model X Performance has a rated range of 305 miles.

Lambda production is expected to take place at a new Geely factory in Wuhan, China though a substantial portion of the engineering work will happen in Hethel. 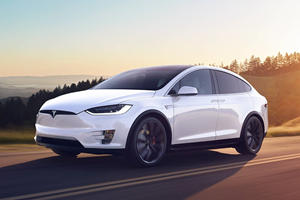