In its first major test, it showed massive improvements over the old truck.

Chevrolet isn't afraid to take its trucks desert racing. In 2018, it put the Colorado ZR2 through its paces in the Best in the Desert racing series and a pre-running of the Baja 1,000. A pre-production model of the all-new Silverado ZR2 also competed in 10 Best in the Desert races last year, but this time, it was the turn of the smaller, newer model.

The all-new Colorado ZR2 made its debut less than a month ago and has already competed in its first desert race. It won its class, but since it was the only competitor, it was a bit of a hollow victory.

Instead, we need to compare it to the time set by the previous Colorado ZR2 to see how much better the new version is. In short: much better.

Chevrolet once again teamed up with Chad Hall Racing and completed the Vegas to Reno leg in 12 hours, 24 minutes, and 49 seconds. The length of the race was 495 miles over rough desert terrain, which means the average speed was roughly 41 mph. Even more impressive is the fact that the new ZR2 completed the run 34 minutes faster than its predecessor.

If nothing else, it proves how sturdy the new Colorado is. The racing truck has a lot in common with the production model, including the new 2.7-liter turbocharged four-pot engine.

Obviously, Chevy used the most potent version of this new powertrain, which produces 310 horsepower and 430 lb-ft of torque. No modifications were made to the engine, and it raced with the standard eight-speed automatic transmission.

The suspension setup was also stock standard. The ZR2 famously uses Multimatic DSSV dampers, which Chevy claims can take a severe beating. More than 12 hours at a speed of 40 mph is a good enough test for us.

However, there are several differences between this racing truck and the standard vehicle. BF Goodrich sponsors Chad Hall Racing, so the standard Goodyear Wranglers were removed. The racing truck also needed a 50-gallon fuel tank and the obligatory safety features like a roll cage.

Other than that, the car was stock. The major mechanical components were more than robust enough to take such a severe beating.

Now we wait for the inevitable Colorado ZR2 Bison to arrive. The previous version was a smash hit, selling out almost instantly during the pandemic.

We received our new taste of Chevrolet's new Bison strategy courtesy of the recently unveiled Silverado ZR2 Bison, which is more of an overlander than a desert racer.

For now, Colorado owners will have to settle for the vast array of off-road accessories available for the new model. Alternatively, you can opt for the Desert Boss Package, which adds a roof-mounted light bar, model-specific bumpers, 17-inch beadlock wheels, exterior decals, and an underbody camera. 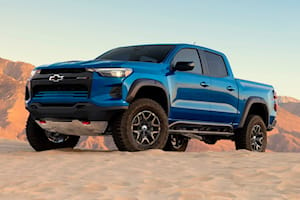 First Look
2023 Chevrolet Colorado First Look Review: The New Boss
Ford might be a bit worried after seeing what Chevy has accomplished with the new Colorado.