Who needs a WRX STI anymore when you can have this?

Way back in April of 2018 we said, "we wouldn't say no to a Toyota hot hatch." Well, that day has come. Meet the 2023 Toyota GR Corolla, the big brother to the bonkers GR Yaris seen on foreign shores and a new breed of rally car for the road. Toyota called on the know-how of Akio Toyoda and a team of professional drivers to develop the car at circuits like Suzuka, Fuji Speedway, and Tsukuba Circuit, while an unnamed Japanese rally driver put the car through its paces on loose surfaces and snow.

The GR Corolla inherits the GR Yaris' 1.6-liter three-cylinder turbocharged engine. Instead of 257 horsepower and 266 lb-ft of torque, it now produces 300 hp and 273 lb-ft, all handled by a six-speed manual gearbox with rev-matching functionality. That power increase is, according to Toyota, largely down to a totally new triple exhaust with outboard and central tailpipe exits, in addition to a part-machined intake port, multi-oil jet piston cooling, large-diameter exhaust valves, and a single-scroll ball-bearing turbo.

That rally-bred engine is paired with Toyota's GR-Four all-wheel-drive system with a variable front-rear torque split that can switch between 60-40, 50-50, or 30-70 distribution depending on drive mode. Open differentials are standard, however, Torsen limited-slip diffs at the front and rear are equipped to the Circuit Edition, or available optionally as part of a Performance Package. Sadly, no performance claims have been made.

While an eight-speed automatic gearbox had been rumored for later arrival, a good ol' fashioned stick shift is the only way to change gears in the GR Corolla for the time being.

The GR Corolla shares the GA-C platform with the standard Corolla but has gone on a significant diet. At 3,249 pounds, it's heavier than a standard Corolla Hatch only because of the AWD system. Carbon fiber was used for the roof, while an aluminum hood and front doors, along with reinforced structural components, reduce weight and improve rigidity.

Two trims will be available, Core and Circuit Edition, with subtle visual differences. The body of the GR Corolla is adorned with all sorts of vents, fins, and body extensions and you'll find every one of them to be functional. Vents in the hood (Circuit Edition only) remove heat from that tiny-yet-mighty motor, and exterior air vents and other aero elements help with stability at speed. The roofline tapers rearwards to a large roof-mounted spoiler on the Circuit Edition and a smaller lip spoiler on the Core model, while front and rear canards and aerodynamically sculpted rocker panels shape airflow around the lower extremities.

Core models can be had in white, black, or Supersonic red with a color-keyed roof, while the Circuit Edition drops black in favor of Heavy Metal grey and packs a forged carbon fiber roof, red-painted brake calipers, and various gloss black elements.

Inside the GR Corolla, you're greeted by a real-deal mechanical handbrake lever, three pedals, and a row-it-yourself manual shifter. Special sports seats with extra bolstering are upholstered in Brin Naub suede and synthetic leather in the Circuit Edition with red stitching, mesh inserts, and GR badging. In the Core, these are fabric with gray stitching. Six-way driver's seat adjustment and four-way passenger adjustment are standard on both. The rest of the interior is trimmed in black with silver detailing around the door handles, air vents, center console, and the GR leather steering wheel, while the Circuit trades silver for red and adds a special "Morizo" signed shift knob, Akio Toyoda's alter-ego. Push-button start and aluminum sport pedals round out the visual upgrades.

Both cars will come with Toyota's new eight-inch Multi-Media System and Toyota Safety Sense 3.0 as standard. The 12.3-inch digital gauge cluster is designed to look as "rally car" as possible while still being familiar. It displays a G-meter, tach, your current AWD torque-split, gearing, and boost pressure.

The Circuit Edition comes standard with Dynamic Navigation and an eight-speaker JBL system replacing the standard six-speaker setup. You'll also have plenty of places to charge plenty of things, with three total USB ports, one of which will be able to run Apple Carplay or Android Auto. The Circuit Edition also has Qi wireless charging. The Technology package for the Core avails these features as optional.

The 2023 GR Corolla will go on sale later this year, with pricing to be announced closer to the time. It will be produced at the GR factory at the Toyota plant in Motomachi, Japan - the same facility that produced the legendary Lexus LFA and the A80 Supra. The Circuit Edition will be a limited launch special for the 2023 model year only.

With the way things are shaping up, it's safe to say that the 2023 Toyota GR Corolla could join the ranks of Toyota's greatest. The brand clearly put real blood, sweat, and gears into its newest hot hatch. Already this strikes us as the kind of car the accountants aren't told about. And like the Lexus LFA, those are the ones that everyone remembers - the ones that people still talk about decades later. All that remains is to see if all that work pays off both on and off the road. 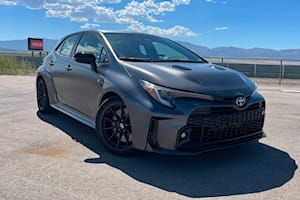