The new Kona EV will be more rugged than ever before.

Hyundai has committed wholesale to electrifying its portfolio of vehicles through the Ioniq sub-brand of dedicated EVs and has rolled out hybrid versions of most of its regular products. But while it might also be pursuing hydrogen if its recent N Vision 74 concept is anything to go by, the South Korean brand is refusing to let go of its earlier EVs. The Kona Electric will be returning for a second generation, where it will once again be partnered with a gasoline variant. Our spies have now caught the first EV prototype on the road outside of Hyundai/Kia's technical center in Germany.

We've previously spotted the gas version of the Kona, but this is our first look at the EV. We know it's electric because of the license plate ending in an E - indicating either a PHEV or full EV - and the poorly disguised charge port on the nose in the same location as the current model.

Given the codename SX2 EV, the new Kona Electric will share underpinnings with the Kia Niro EV. As such, it will inherit that model's 64.8-kWh battery and 201-horsepower electric motor, capable of charging from 10-80% in under 45 minutes. The claimed range on the Niro is 253 miles, so we should expect similar here. For reference, the current model has an EPA range of 258 miles.

The Kona's signature has always been its quirky styling, and we expect the new second-generation car to stand out again. Hyundai will stick with a split headlight design, and it is believed the front end will take influence from the Tucson. From the heavily camouflaged test mule, we can see angular wheel arch cutouts and a strong, angular shoulder line, much like the Tucson. The wing mirrors also appear to be more aggressive. 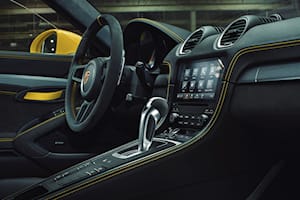 The prototype's rear is heavily shrouded, but we can see a split taillight design here.

We know from our previous spy shots of the standard model that the new Kona will get a digitalized interior with a widescreen infotainment-cum-instrumentation display comprising two 12-inch displays. Horizontal HVAC vents and physical buttons and knobs for the climate control system will feature.