These are the five most unique and powerful versions of the legendary German roadster.

The all-new Mercedes-Benz SL was recently leaked in full before its official debut at the 2015 Los Angeles Auto Show. This got us thinking about the long and storied history of the SL. In the past we covered the evolution and history of each generation of this car, all the way from its racing roots in the early 1950s that spawned the 300SL until the SL65 AMG. After some thinking we decided to make a list counting down the most extreme versions of the iconic Mercedes grand tourer. Hopefully your favorite made the cut.

Carlsson C25 Super GT Final Edition The well-respected German tuning house Carlsson used the infrastructure of a Mercedes-Benz SL to make the 753 hp, full carbon-fiber bodied C25 Super GT. The car also makes 973 pound-feet of torque using a 6.0-liter twin-turbo V12. Compared to stock, this Carlsson version of the SL is enhanced with larger carbon-ceramic brakes, a stainless steel exhaust system with aluminum tailpipe outlets and a suspension that you can adjust using your iPhone. It also looks pretty damn fierce as well.

The Legendary 300 SL The 300 SL makes our list because of its pioneering role in automotive design and performance. Rudolf Uhlenhaut was the man behind it. He worked on the Mercedes racing program in the 1930s and by 1950 was heading up its passenger car research division. In 1950 he built the code-named W194 chassis, the direct foundation of the 300 SL. The tubular, space-frame chassis was lightweight at only 110 pounds. This inspired the engineers to name this new class of car after a German phrase that translates essentially to "Super Light." By 1954, the year the SL Gullwing (Coupe) was built its 3.0-liter 215-horsepower engine could hit 155 mph.

The Absolutely Mental Brabus 850 It wasn't long ago when Brabus was able to boast this highly modified SL as "the fastest roadster on the planet." This ferocious hardtop convertible uses the SL63 AMG as its foundation. From there, Brabus modded it to top out at 230 mph and lay down 1,069 pound-feet of torque. That figure was actually limited to 848 lb-ft to keep everything from exploding. You probably guessed, having seen the name and all, that it made 850 horsepower. It's safe to say Brabus' creation makes the 537-hp stock SL63 AMG look like a slouch.

Laurence Gartel's 1982 SL Digital artist Laurence Gartel makes a pretty appealing case for the viability of using a Mercedes-Benz SL as a blank canvas. Gartel became notable in the small, yet still interesting, world of art cars with his 2010 take on a Tesla Roadster and his 2011 redesign of a Ferrari 430 Scuderia. The artist started with a very well-preserved 380 SL from the model year 1982, turning it into something pretty damn psychedelic. Those of you who follow the art car scene know that Gartel won "Best of Class" art car award at Amelia Island Concours d'Elegance earlier this year.

The SL That Wasn't Afraid To Get Dirty Every Mercedes-Benz rally car we've seen is envy-inducing. There's some strange allure to the notion of being able to run through a patch of shallow water or a dusty trail in something as nice as, well... a Mercedes. Daydreaming aside, the 1981 model year 500 SL is truly a sight to behold. Erich Waxenberger, the original owner who decided to turn this droptop into a rally car, still maintains the vehicle today. Over the years he's put in an aluminum roll cage and replaced all glass components (besides the windshield) with a more durable polycarbonate material. 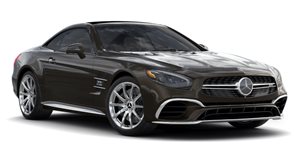 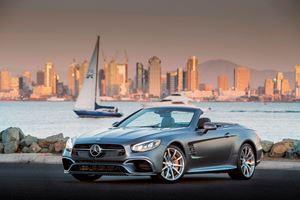