This isn't a normal kind of hybrid.

The 2021 Mercedes-AMG GT63 is the fastest sedan in the AMG arsenal, but it won't stay that way for long. Mercedes wants to take back its Nurburgring crown from Porsche, so it will introduce a more powerful GT73 variant shortly. We've seen the GT73 teased before, using the same 4.0-liter twin-turbocharged V8 engine found in the lesser GT63 S. Bolstering the GT73's dominance as the ultimate AMG car, it will tack on a plug-in hybrid powertrain, bumping the total output from 630 horsepower and 664 lb-ft of torque to a reported 800 hp.

Such a car should produce blistering lap times around the Nurburgring, and in these latest spy videos, we get a sneak preview. The two prototypes in the video look near-production-ready, meaning a reveal could happen soon.

Spy shots of the GT73 have provided some insight into the new car but seeing it in motion around the world-famous Nurburgring is far more illuminating. Adding a PHEV system to the AMG GT 4-Door is a great way to make the car faster without disrupting the sound of the 4.0-liter V8. AMG already managed to make a turbocharged engine sound better than most of its competitors, and the electric power won't take anything away from that awesome exhaust note (as evidenced in the video).

With traction from a 4MATIC all-wheel-drive system and the instant torque of electric motors, the GT73 should comfortably exceed the GT63's 3.1-second 0-60 mph time. We expect the GT73 to break the three-second mark, making it one of the quickest sedans in the world.

The GT73 will heavily focus on performance, but the PHEV system will also provide the car with a few miles of electric-only driving, improving the everyday drivability. In GT63 S form, the GT 4-Door achieves pretty abysmal fuel economy ratings of 15/20/17 mpg city/highway/combined. Perhaps with the addition of electrification, the car will achieve maximum performance and maximum efficiency. 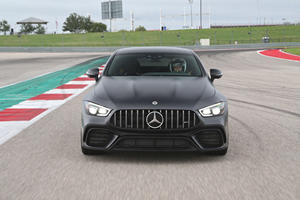