9 Fast & Furious Cars You Need In Your Life

With Vin Diesel promising "one last Trilogy," Fast and Furious fans can look forward to three more movies and Universal to three more massive paychecks. We have already identified that the acting and story line isn't what helped the franchise generate more than $3 billion and counting. It's the cars. From the nitrous oxide fueled motors from the first film to the Lykan Hypersport plunging 45 floors from the Etihad towers in Abu Dhabi, it has been one hell of a wild ride. Everyone has a favorite car, so we picked out nine you can buy right now on eBay.

1994 Toyota Supra MK IV – The Fast and The Furious From totaled to highly-tuned monster fast enough to smoke a Ferrari in a street race, the Diablo orange fourth-gen Toyota Supra is a Fast and Furious legend. You won't find one with that exact color anywhere, but this twin-turbocharged Supra Targa is a gorgeous example.

2001 Honda S2000 – 2 Fast 2 Furious Suki's hot pink S2000 sported a Veilside Millennium body kit, airbrushed artwork and a massive bottle of NOS in the trunk. The engine is a 2.0-liter inline-four with a Comptech supercharger. While the example currently on eBay doesn't boast similarly loud body colors, it does mimic the supercharged engine and looks to be in superb condition.

1967 Ford Mustang Fastback: Tokyo Drift Best known for coming powered by a Skyline GT-R engine, the six 1967 Ford Mustang Fastbacks from Tokyo Drift were actually built using 68 models, and it took the production team two months to transplant the Skyline's engine from a Nissan Silvia S15. All the Stangs survived the movie, and some were sold on eBay. These are long gone now, but this is a fine example available right now.

Plymouth Roadrunner: Fast and Furious 6 The Roadrunner first appears in Tokyo Drift, a completely new model arrives for the next movie, while in F&F6 it appears in a flashback scene and is used in a drift race in Furious 7. Stunning in any color, this two-tone red and black example packing a 500 Stroker V8 engine is a about as good as one of these muscle cars gets.

Nissan GT-R R35 - Furious 7 Seven of these Nissan GT-Rs were used in production for Furious 7, and only one wasn't wrecked. While that is now housed in the Hollywood Star Cars Museum in Gatlinburg, Tennessee, this low mileage gray example can be yours for a Buy It Now price of just under $79,000.

Lykan Hypersport – Furious 7 Powered by a mid-mounted, twin-turbo 3.7-liter flat-six with 750 horsepower and 737 lb-ft of torque, the enigmatic Lykan Hypersport was the four-wheeled star of Furious 7. With just seven to be made carrying a price tag of $3.4 million a pop, finding one for sale is near impossible. So here's the next best thing.

1970 Dodge Charger R/T – features throughout franchise Vin Diesel's signature car featured throughout the franchise. The 1970 Dodge Charger R/T fits between being in mint condition and completely destroyed, powered by a range of engines including a blown 528-cubic-inch Hemi V8, with eleven units used for Furious 7 alone. Of its many insane stunts, arguably the most ludicrous saw one Charger dropped from 12,000 ft and another exact replica from 8,000 ft out of a Lockheed C-130 Hercules plane above the Arizona desert. For $90,000 you can pick up this award-winning example right now. 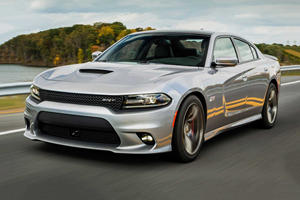