GM has a ton of explaining to do after one of its newest trucks burnt to a crisp. A redditor named Greg shared the story of how his 2015 GMC Canyon died a fiery death. He had put 9,500 miles on it before it started smoking one day out of the blue. Greg pulled over and was greeted by flames when he popped the hood. He quickly ran away and watched as his brand new truck was completely engulfed in flames, along with his prescription sunglasses, iPad and briefcase.

Firefighters said they believe the blaze started in the alternator, and Greg said on Reddit that he caught a whiff of "what smelled like an overheating electrical motor" when he saw the smoke. Either way the truck is toast, and when GM was contacted the automaker basically said that since an insurance claim was filed there was nothing that could be done. Greg is pissed, and understandably so, because he's out both his deductible and down payment (about $5,000). Luckily the internet and social media are working magic and the dealership agreed to help Greg out. It remains to be seen what GM does and if this is an isolated incident or a precursor of things to come. Canyon and Colorado owners, stay vigilant. 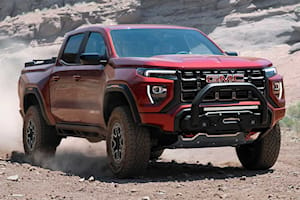