A privately-owned Tesla Model S Performance just set a new record at the drag strip, with some help from a new-and-improved Launch Mode with a clever little feature dubbed "cheetah stance". "Cheetah stance" uses the EV's adjustable air suspension to drop the front end of the car lower than the front, optimizing the rake angle for maximum launch and acceleration.

Thanks to that little bit of extra assistance, YouTuber Everything-Electric was able to blast through the quarter-mile in just a hair over 10.4 seconds - a new record (as far as we know) for stock Tesla Model S Performance models.

The car he did it in is a stock white Tesla Model S P100DL, and it had to contend with a 20-mph side wind. In more ideal conditions, it's reasonable to suspect the car could have posted an even more impressive quarter-mile time - a time that's already less than a second off the dragstrip-bred Dodge Challenger SRT Demon's advertised 9.65 seconds.

But how much of a difference does the revamped Tesla Model S Performance Launch Mode and its "cheetah stance" really make? Where Tesla had previously listed the Model S Performance's 0-to-60-mph time at 2.5 seconds, the Palo Alto-based EV manufacturer dropped the official figure to just 2.3 seconds after the update.

This isn't our first exposure to what Tesla's new Launch Mode means for the Model S Performance; earlier in the month, DragTimes pitted a Tesla with the update against the Porsche Taycan Turbo S - the top-performing version of Porsche's sporty, capable new Taycan electric sedan. While the Tesla failed to eke out a definitive win against Porsche's battery-powered phenom, it most certainly held its own.

Granted, that acceleration battle was done on public roads, without the proper equipment. We'll have to wait until the two EVs can go toe-to-toe on a proper dragstrip before we can say with certainty which is the high-performance EV king.

Sports Cars
Toyota Refuses To Abandon What Rivals Did Years Ago 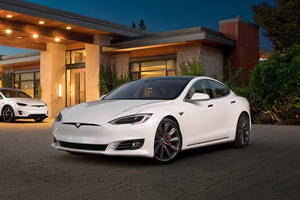