Alfa Romeo Has BMW X5 Competitor In The Works

And possibly a 7 Series alternative, too.

With the recent unveiling of the Alfa Romeo Tonale, the charismatic Italian automaker now has two crossovers in its lineup. The Tonale, of course, slots in below the Stelvio and will take on German competitors like the BMW X1 and Audi Q3. Fortunately, Alfa is not completely abandoning its roots and has a plan to produce sports cars once again before the end of this decade. But in a time when even Ferrari has succumbed to developing an SUV, Alfa knows that it needs a strong SUV lineup to remain profitable. To that end, the Stelvio and Tonale are set to get a bigger brother that will compete with BMW's X5 and X6.

Speaking to Auto Week, CEO of Alfa Romeo, Jean-Philippe Imparato, explained his desire for the brand to move even further upscale. "I haven't told anyone that before, but since I want to be Stellantis' global premium brand and because everyone in the world knows our brand, I want to market a high-end SUV," said Imparato.

He went on to describe this as "an E-segment car with very high performance" before directly mentioning the X5 and X6. But Imparato also spoke of another BMW target: the 7 Series. Because Alfa has historically enjoyed greater success with small, sporty models such as the 4C and 147, new X5 and 7 Series competitors would be a big step outside its comfort zone.

While we have no doubt that Alfa will be able to pen beautiful designs for larger models and also make them good to drive, shoppers will also expect these cars to be built to an exceedingly high standard, something Alfa has struggled with in the past. Imparato said that a new, bigger Alfa can be expected sometime in 2027. Late last year, Alfa said that all its new models will be electrified from 2027, so we can expect the X5 and/or 7 Series rival to at least be a hybrid.

Considering that today's Stelvio Quadrifoglio costs almost $85,000, Alfa's new SUV will comfortably extend into six-figure territory. Will Americans be willing to spend that much on an Alfa instead of a BMW or Mercedes-Benz? As one of the few brands that at least try to inject a driver-focused appeal into every car it makes, we sure hope the answer to that question is a resounding "yes". 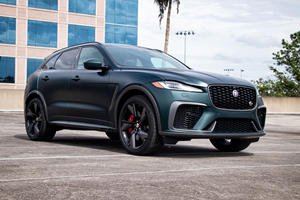