The Alfa Romeo Tonale has not had the most leisurely start in life. First unveiled at the 2019 Geneva Motor Show, this gorgeous compact luxury crossover quickly became one of the show's stars. The original timeline had the Tonale arrive in the USA this year, but the year we shall not speak of happened. And then FCA and Groupe PSA joined forces to create Stellantis, and in the middle of that all, Alfa decided the Tonale needed to be re-engineered if it was to set new standards in a highly competitive segment. Alfa's compact luxury crossover is still set to go up against the BMW X1, Audi Q3, and Range Rover Evoque. That's quite a tough crowd, and the Tonale will have to be something exceptional to compete. Alfa's new CEO seems to agree. But new spy shots by Walter Vayr show how the Tonale will fit in alongside the only other Alfa Romeo SUV, the Stelvio.

In addition to the delays caused by 2020, Alfa's new CEO, Jean-Phillippe Imparato, wasn't pleased with the Tonale when he arrived. Following the Stellantis merger, Imparato arrived at Alfa's headquarters and wasn't happy with the hybrid model's performance. That's fine by us. He seems like our kind of guy.

The Tonale is said to use the same setup as the Jeep Compass 4xe PHEV. That means it will use a turbocharged 1.3-liter engine and a 60 hp electric motor to produce a combined power output of 240 hp. Considering the competition, that's already adequate, but perhaps Imparato wants Alfa to deliver a worthy little brother to the sensational Stelvio. Unfortunately, a hardcore Quadrifoglio model seems to be out of the question.

New spy shots don't reveal any previously unseen detail of the Tonale, but they do place it alongside the Stelvio, showing that the new crossover isn't much smaller than the latter car. Crucially, the overhangs appear to be minimal, which is already a good sign. And the front end, though disguised, seems to indicate that the Tonale will retain the design inspired by the Alfa Romeo SZ.

The Jeep Compass, on which the Tonale will be based, has been unveiled and will go on sale this fall. The fact that Alfa Romeo is still busy with development is a sure sign that it wants to take the Tonale in a different direction. It makes sense from a business standpoint. Customers searching for an adventurous crossover will opt for the Compass, while those with an eye on something sportier will go for the Tonale. Either way, Stellantis gets the money. 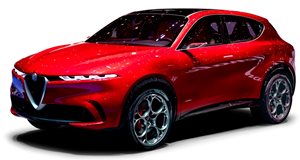