A couple of weeks back we showed you the latest creation of Japanese designer Ken Okuyama, the Kode57. Okuyama once worked for Pininfarina where he was tasked with designing the Maserati Quattroporte as well as the iconic Ferrari Enzo. He's since started his own design studio, and the Kode57 was what he brought to Pebble Beach this year. We were told that it would carry a $2.5 million price tag. Not surprisingly, boxer and serial car collector Floyd Mayweather supposedly placed an order for one.

And now we've learned that Mayweather will own one-fifth of the entire Kode57 production run. Yes, only five examples will be made. Based on the Ferrari 599 chassis, the Kode57 is powered by that car's 6.0-liter V12, which has been tuned to produce 702 hp. Total weight comes to 3,200 lbs. Performance specs haven't been made available, but they'll be impressive considering that low curb weight. Okuyama also plans to return to Pebble Beach every year with a new coachbuild project. Chances are those cars will also see very limited production runs. As for all five Kode57s, let's hope their lucky owners will actually drive them instead of storing them as future investments. We're not very hopeful. 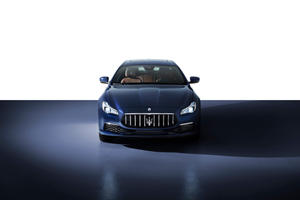