It will arrive in 2021 and take over as the Korean brand's halo model.

It wasn't long ago that electrified vehicles were mere bit-players within automakers' lineups. Today, that outlook is changing rapidly as hybrids/EVs begin to take over as leading models. The quickest Porsche Panamera is the E-Hybrid version, and the next-gen BMW 7 Series will be crowned by a fully electric variant.

Now, even non-premium brands like Kia are following suit - according to Auto Express, the Korean manufacturer is set to launch an electric crossover next year that will act as its halo model. For now, it's known as the Kia CV and it'll feature 800-volt technology from another highly regarded EV: the Porsche Taycan. Right now, Kia's priciest model is the full-size K900 sedan, which comes in at around the $60,000 mark - the CV should challenge how much customers are willing to pay for a Kia.

The Kia CV will take advantage of the Hyundai Group's scalable Electric-Global Modular Platform (E-GMP), which is set to underpin everything from the stunning Hyundai Prophecy Concept to the next generation of the Hyundai Kona EV. But Kia's CV looks like one of the most exciting uses of the platform yet, as the report states a range in the region of 300 miles and charging in under 20 minutes. It will be compatible with the 350-kW fast-charging network, IONITY.

The CV crossover's positioning should ensure brilliant acceleration, too. The COO of Kia Motors Europe, Emilio Herrera, said: "We will have in the new EV a high-performance vehicle like an e-GT." If the CV gets even close to the Porsche Taycan in terms of power and performance, it will set new benchmarks for the brand.

Appearance-wise, the upcoming CV is expected to follow some of the styling cues seen on the Imagine Concept, which has a distinctive fastback rear end and a more aggressive interpretation of Kia's grille. Speaking about the Imagine Concept when it was first unveiled, Kia's European design chief Gregory Guillaume said that: "Automotive design is about capturing the heart and making it beat that bit faster for that bit longer. We believe that there's absolutely no reason why that should change simply because a car is electric."

The range-topping CV crossover forms part of Kia's bigger plan to increase its EV market share to 6.6 percent, although this excludes the Chinese market. Kia also wants environmentally friendly vehicles to comprise a quarter of all its vehicles. There is no word on pricing yet, but expect Kia's range-topper to come in at a saving over powerful German EVs. 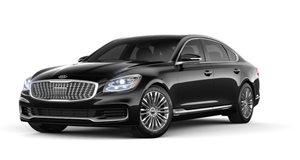