Although it can trace its roots back to the original Toyota Celica, the Scion tC never was or will be a true successor.

There is quite a bit of debate over what differentiates a sports car from a supercar, and it is a debate which could go on for ages. But what we would like to clear up is what makes the difference between a sports car and a car which is merely shaped like a sports car. The Scion tC is unfortunately not quite a sports car, and this has become all the more noticeable now that it has to share a dealership with the FR-S, something which actually does qualify as a sports car.

The tC is the spiritual successor to the Toyota Celica, a car which was once a serious performance machine. High performance versions of the Celica had been powerful Group B rally cars, and even after Group B folded, the Celica GT-Four would go on to be a championship-winning WRC rally car during the early Nineties. There were homologation cars, and the whole line benefitted from living in the WRC spotlight. But eventually, this kind of top-level competition would come to an end for the Celica. Homologation cars were no more, and soon factory turbo options would disappear as well, along with the AWD option.

By the time the tC came along, we found ourselves talking about a significantly heavier car which didn't offer much more power than the old naturally aspirated Celicas. With the current car producing 180 horsepower and weighing more than 3,000lbs, the word "sporty" might be the best it can hope for. Now, you might be thinking that Japanese sport compacts have never produced huge power numbers, and it was their power to weight ratio that made them fun. Well, let's compare the tC to the V6 Mustang, a car which has long been considered the standard for automotive poseur-dom. The 305 horsepower produced by the current V6 means that the Mustang is producing 178.3 horsepower per ton.

Now, if the V6 Mustang isn't a real sports car, the tC's 113.9 horsepower per ton is an outright joke. It's actually closer to the Prius's 88.1 horsepower per ton than the Mustang's figure. But this shows why Scion needed the FR-S, because the tC has basically become completely irrelevant. A supercharger kit was offered for a while from TRD through Scion dealerships. This was only available for the first-gen tC, and it took horsepower up from 161 to about 200. This was still less than a fifteen-year-old Celica GT-Four, and in a car which weighed about 500 pounds more.

The kit was never very popular, and it's not difficult to see why. Beyond the fact that it was never the greatest of performance upgrades, the tC was never a great car for going fast in the first place. It should be pointed out that that there have been some motorsports applications for the tC, but these have been a far cry from the days of homologated Group B monsters, and the race cars have typically had little in common with the actual road cars. With the tC able to trace its roots back through the Celica to 1971, we can see that its problems are worse than a simple failure to evolve.

What the tC reflects is a shift in priorities for automakers in building cars for young people. Where once the goal was to get as much horsepower for your dollar as possible, conventional wisdom says that young people want as much electronic gadgetry for their dollar as possible. There is certainly some truth to this, and an emphasis on gadgetry in the decidedly un-sporty Scion xB makes a good deal of sense. But in a car with a flat-bottom racecar-style steering wheel, as well as other appearance-only sporting touches, this lack of performance emphasis is noticeable to the point of being an embarrassment. 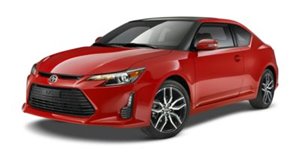