The Alpina B4 has been spotted around the Nurburgring.

The new M4 is available as a coupe or convertible, but it isn't getting the Gran Coupe treatment. With the M3 only available with four doors, an M4 Gran Coupe arguably isn't necessary. Alpina clearly disagrees and is working hotter 4 Series Gran Coupe that will be the next best thing to an M4 Gran Coupe. Back in August, we got our first glimpse at the new Alpina B4 Gran Coupe.

A few months later, the B4 Gran Coupe has been spied flexing its muscles at the Nurburgring. This time, the prototype has been updated with some of Alpina's signature performance enhancements that set it apart from the regular 4 Series.

At the front, the prototype now features a prominent lip spoiler. Since our last sighting, the prototype has also been upgraded with a subtle trunk lid spoiler. These enhancements make the B4 Gran Coupe look more aggressive than the regular 4 Series. Other upgrades include beefier brakes, a quad exhaust system, and reworked suspension. We don't get a look inside the interior but expect the cabin to feature illuminated door sills and more extensive customization options.

Under the hood, the B4 Gran Coupe is will be powered by the Alpina B3's twin-turbo straight-six, which produces 462 horsepower and 516 lb-ft of torque. For comparison, the regular 4 Series Gran Coupe is rated at 320 hp and 330 lb-ft in its 440i guise.

This isn't the only retuned BMW Alpina is cooking up. Earlier this month, we caught Alpina testing a facelifted version of the XB7, which is based on the BMW X7. Alpina is also preparing to give the 3 Series-based B3 a refresh. Without the controversial kidney grilles, the B3 will effectively be a much better-looking M3.

Sadly, the Alpina B3 isn't sold here, so we're keeping our fingers crossed that the B4 Gran Coupe will be available in America. If it does, expect it to cost more than the regular 4 Series Gran Coupe, which starts at $44,750. 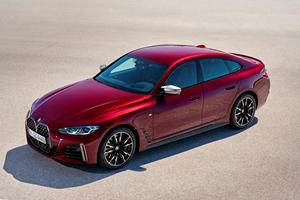