The elusive Apple Car always seems a few years away. Last week we reported that the tech company poached a Tesla engineer, a good sign, but a month ago Apple walked away from talks with China's CATL and BYD for batteries. On Thursday Bloomberg reported some good news, citing secret sources, that say the car could arrive as early as 2025.

Apparently, the company is developing two versions of the car, one with full self-driving and no human interaction, and another focused on heightened cruise control with steering and acceleration assistance like Cadillac's Super Cruise. We feel a little more confident in the Apple team than the Tesla team on FSD, which makes huge promises and rarely delivers.

Project Titan, as it has been known, is now under the control of Apple Watch executive Kevin Lynch, who is pushing for the full self-driving option. The project was formerly headed by Doug Field, who's now doing the bidding of Ford.

The original target date was 2025 or 2026, but now the company is targeting the earlier date. Bloomberg reports that timing is still fluid, though. The car could possibly come without Level 5 autonomous driving, and/or be updated at a later time. If we do get full self-driving, we know what to expect, a box with an iPhone on wheels.

We're half-joking, but Apple sees its vehicle as a place where people can face each other while riding, possibly playing on a giant touchscreen in the middle. Obviously, it would all run on the company's proprietary operating system.

That won't be the case for the model requiring human involvement, however, and new patent documents uncovered by a member of the Apple Car Forum show a fairly traditional dashboard design, with a steering wheel, that has been patented by Apple with the European Patent Office. The documents showcase a center stack housing a massive configurable screen setup. The entire thing will be touch-operable and can be customized in any number of ways to include rotary-look controls for volume and HVAC - all touch-operated of course, dedicated infotainment displays, navigation screens, etc.

Basically, the functionality will be much the same as a modern iPhone where you can open apps to control various aspects of the vehicle, with pinch and swipe commands and various touch gestures to control everything. If the company can get this to work, it'll be like the Mercedes Hyperscreen, only better, as instead of dead spaces that merely look like a screen, the entire thing will be functional.

Apple says it has almost all of the core work on the processor completed, which will ship in the first vehicles on the road. As opposed to being designed by the car team, the chip came from its iPhone/iPad/Mac team, who also tweaked the software. Those chips will probably make their way to its current California fleet of 69 Lexus RX SUVs as testbeds.

They're still hiring for the project, so if you fancy yourself the next Elon Musk or RJ Scaringe, there's an opportunity to get in on the ground floor. And if you do, let us know when we'll see the car. We're guessing 2026. 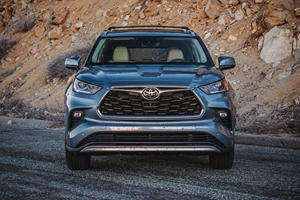