The British carmaker is lagging behind, but not all is lost.

The auto manufacturing world has entered the age of electrification with more and more brands heading for the green source of propulsion. While brands such as Tesla are spearheading the revolution, others are lagging behind. That appears to be the case with Aston Martin, the legendary British manufacturer lauded for cars such as the Vantage and DB11. Back in January, it was reported that the Aston Martin Rapide E, the company's first-ever fully electric model would no longer enter production. Unveiled at the 2019 Shanghai Auto Show, this stillborn electric performance car was the first signal that Aston Martin was falling behind the pack, but is the brand doing enough to stay in the electric race?

2020 has brought with it new leaders, a new business partnership, a global pandemic, and a complete rethink of Aston Martin's product plan. Despite these challenges, it turns out that there is a light at the end of the tunnel: Mercedes-Benz's 20 percent stake in the company gives Aston numerous benefits, one of the most notable being Merc's willingness to share its next-generation hybrid and electric powertrains. But how did Aston Martin come to rely on the German giant for its electric future? According to Autocar, around three years back Aston Martin chief designer Marek Reichman told the media that Rolls-Royce and Bentley were the equivalents of "Ancient Greece", but things have changed dramatically since then.

It turns out that Rolls-Royce is on path to building its first-ever electric car, with CEO Torsten Muller-Otvos confirming that we can expect the first Rolls-Royce EV to arrive sometime this decade. Rolls-Royce has also acknowledged the fact that the brand will have to go fully electric by 2040. Bentley on the other hand is planning to go fully electric by 2030, and has already confirmed PHEV versions of the Bentayga and possibly the Flying Spur. If Aston Martin wants any part of this beaming future, it better start sparking. 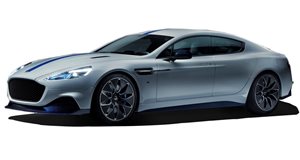