Aston Martin Motorbike Is A Thing Of Beauty

The AMB 001 is the first fruit of a collaboration between Aston Martin and Brough Superior.

Aston Martin makes road cars and race cars, coupes and convertibles, even four-doors and (soon) crossovers. The one thing they all share in common, of course, at the root of it, is that they all have four wheels. But not this one.

Following earlier teasers, Aston Martin and Brough Superior have revealed the first fruit of their collaboration at the EICMA motorcycle show in Milan. It's called the AMB 001, and it's essentially the two-wheeled equivalent of a Valkyrie, Vantage, or DB11. But however many (or few) wheels it has, you can't ride it on public roads.

The AMB 001 is built around a 180-horsepower turbocharged V-twin engine, which makes it not only a first for Aston Martin, but for Brough Superior as well (which has never offered a turbocharged motorbike). The design is all Aston, though – uniquely modern without going over the top, with carbon-fiber bodywork in a "strong, sculptural" form, a vertical fin (inspired by the side strakes on Aston's road cars), and an Oxford Tan leather saddle. The whole package weighs less than 400 pounds (dry), or about a tenth the curb weight of a DBS Superleggera.

"This is what we believe a cutting-edge motorcycle should be and we are very proud to see the Aston Martin wings on a motorcycle for the first time," noted Aston Martin's chief creative officer Marek Reichman. "In addition to applying the skills we have developed for cars such as the ground breaking Aston Martin Valkyrie we have also been able to bring our special expertise in the traditional craft techniques to this project. The finished product is a truly beautiful motorcycle; a design and engineering work of art." 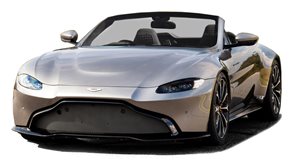 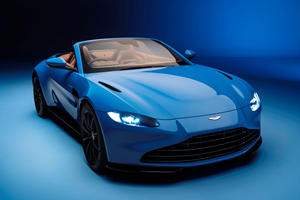