It will be one of four Aston Martins featuring in the new James Bond movie.

The new James Bond movie 'No Time to Die' was originally going to open in theaters back in April but the spy film became one of the first big 2020 blockbusters to be delayed due to the pandemic, followed by Fast & Furious 9. Now, with the film's release rescheduled to November, the marketing campaign for 'No Time to Die' is starting to regain traction with the release of a new trailer featuring plenty of automotive action.

Like in the first trailer, we get to see the iconic Aston Martin DB5 get put through its paces in the film's opening car chase set in Matera, Italy, drifting through tight streets and doing a donut while taking out enemies with machine guns mounted behind the headlamps. In the chase, Bond will be pursued by bad guys on bikes, a Jaguar XF, and a fourth-generation Maserati Quattroporte. Just don't expect the Aston Martin DB5 to survive this scene in one piece.

As well as the DB5, the classic Aston Martin V8 Vantage that featured in 'The Living Daylights' will also appear in the film along with the Aston Martin DBS Superleggera. For the first time, we also get a sneak peek at the Aston Martin Valhalla in the trailer, seen briefly in a wind tunnel.

We don't get to see it in action, sadly, but we suspect it will only make a brief appearance in the film. Since the 986-hp mid-engine hypercar isn't expected to arrive until 2022, the car shown in the film will likely be a prototype previewing the final production version. To promote the film's release, Aston Martin recently launched new 007 editions of the Vantage and DBS Superleggera.

In another scene, a fleet of new Land Rover Defenders feature in a dramatic off-road chase against Bond in a Toyota RAV4. Like the Aston Martin DB5, the Defenders take a beating, performing massive jumps and getting destroyed in some spectacular stunts. A Range Rover SVR also flips high into the air and Bond narrowly avoids a Defender rolling over in a forest at the end of the trailer.

'No Time to Die' will release in theaters on November 12 in the UK and November 20 in the US. Judging from this new trailer, it will have some of the best stunt driving in a James Bond film yet. 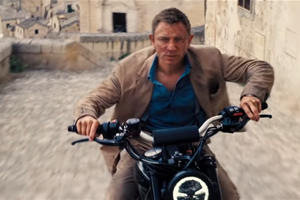 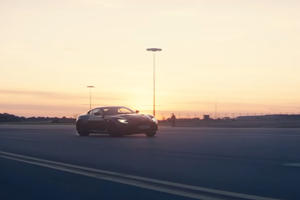 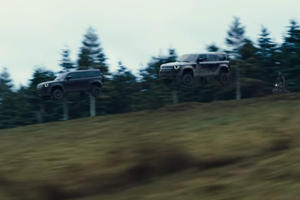 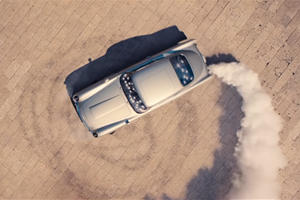 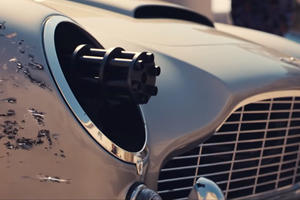