This thing is properly rapid.

Every so often, someone makes a car that is designed from the ground up to be a rule-breaker. Not in the marketing sense, but very literally. The Aston Martin Valkyrie AMR Pro is one of those cars. However, the car wasn't initially built that way. Instead, it was going to do the opposite, built by Aston, Red Bull, and famed race car designer Adrian Newey to run in the 24 Hours of Le Man's new hypercar class.

In effect, all those rules the original homologated Valkyrie was built to adhere to were thrown out, and this car is the result. That result, per Aston Martin, is a car "freed from race rule constraints," and the brand says the AMR Pro's capabilities have surpassed the initial Le Mans car. Now, we get to see the fruits of those labor, flat-out at the Bahrain Grand Prix circuit.

Powered by a naturally aspirated, 1,013 hp V12 that revs to 11,000 rpm, you could argue that the AMR Pro sounds more extreme than any F1 car on the grid. Thanks to the Pro's rule-free design and insane engine, you'd probably be right. Aston Martin didn't provide an exact lap time from Bahrain, but the brand says the performance of the AMR Pro comes pretty darn close to the Formula 1 cars that also hit the track the weekend of the Bahrain GP.

Aston's development driver, Dirk Muller, backed up those claims, saying the car was "closer to an F1 car in terms of performance than anything else I have ever driven."

Engine aside, it's pretty easy to see why upon watching the video. Aston Martin ditched the base Valkyrie's hybrid system to save weight, as well as using Perspex for the windscreen and side windows, carbon fiber suspension bits, and, well, just more carbon through the body of the car. As a result, the car weighs less than 2,200 lbs.

The new, significantly more aggressive aero package delivers a claimed 3Gs of cornering force and over 4,400 lbs of downforce. If that isn't enough to keep up with Lewis Hamilton, we don't know what is.

While a lap time for F1 car comparison hasn't been posted, we do know how the AMR Pro should compare to the cars it was originally designed to compete with. Around the 8.5-mile Le Mans circuit, Aston is hoping for a 3 minute and 20 seconds time, just six seconds off one of Toyota's LMP1 Le Mans cars. With the Valkyrie AMR Pro now up and running, and deliveries already underway, it makes us wonder just how fast the upcoming Aston Martin Valhalla will be. 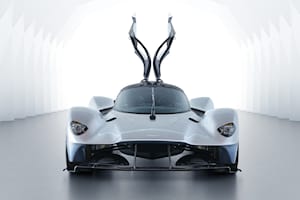 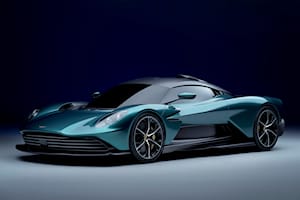