It's a beautiful beast.

When this Kahn Flying Huntsman 6x6 was revealed at the Geneva Motor Show earlier this year, it was a real show stopper. And now, thanks to this glorious photoshoot courtesy of Kahn Design, we get to relive the magic with an up close and detailed look of this beautiful beast. In case you haven't already noticed, the Flying Huntsman is a heavily modified version of Land Rover's beloved Defender, the production line of which is officially coming to an end this year. The incredibly detailed customization on the Flying Huntsman is truly masterful.

The team at Kahn Designs stretched the Defender 110 significantly to make the Huntsman look so monstrous. The front end of the vehicle has been extended by nearly 16 inches and the rear end was stretched by just over 2.6 feet. The body of the Huntsman was also widened by a full six inches. So what did Kahn do with all of that extra space? Besides turning the Defender into a six-wheeler by adding two extra wheels and a third axle, they also added a bevy of other performance upgrades. Some of the custom add-ons include suspension mods, upgraded brakes and a super heavy-duty chassis.

Under the hood the Flying Huntsman is packing a 6.2-liter GM LS3 V8 that produces around 430 hp. The monstrous six-wheeler is also packing a custom stainless-steel exhaust system as well as a GM six-speed automatic tap-shift transmission. The interior of the Huntsman is decked out with gorgeous bright red leather which is offset by a plad pattern lining plush racing seats. Does all of this make Kahn Design's Flying Huntsman worth the $310,000 sticker price? Well, at half the price of a 6x6 Mercedes G63 AMG, some might consider this to be a bargain. 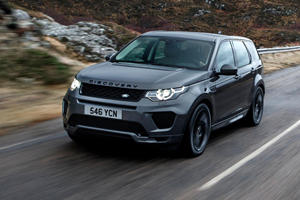