The Horsepower Wars rage on in Germany. Advantage: Audi.

If you thought the horsepower wars were over in Germany, think again. Because while the elite cadre of luxury muscle cars have been getting smaller engines, they've hardly been getting less powerful in this constant game of one-upmanship. And the ball is in Audi's court. For the latest M5, BMW switched from a 5.0-liter V10 to a twin-turbo 4.4-liter V8, but while the displacement and cylinder count decreased (replaced by a set of spools), power increased from 507 horses to 560.

Now Audi is preparing to roll out a new RS6 to challenge the 560hp M5 and the 550hp Mercedes-Benz E63 AMG. The previous RS6 used a twin-turbo V10 with 580 hp, but the next one is tipped to pack a more powerful version of the new S8's twin-turbo 4.0-liter V8, but increased in output from 520 hp to about 572. That may be slightly less than the model it replaces, but would be more powerful than its nearest competitors. And with less weight than its predecessor, the new RS6 promises to be even faster. Best of all, though the previous RS6 (pictured in blue) never made it Stateside, the new model very well could cross the Atlantic faster than it could run the quarter-mile. 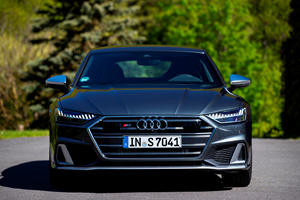 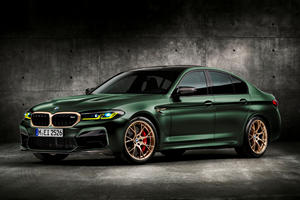