Audi Bringing Future And Past Icons To Monterey Car Week

Ingolstadt is whipping out some legends from the past and show-stoppers from the future.

Audi fans have plenty to look forward at this year's Monterey Car Week. The German automaker announced it will be bringing some special motorsport heroes to display alongside its electric concept cars. Friday, August 19, will be dedicated to the "sphere" vehicles, which will be on display at The Quail.

This family of three electric concepts includes the elegant Grandsphere concept, a sophisticated grand tourer with plenty of room for occupants, dramatic suicide doors and Level 4 self-driving capability. Grandsphere will also be on display at Pebble Beach.

It will also be joined by the drop-dead gorgeous Skysphere concept, a 624-horsepower cabriolet that has the ability to shorten its wheelbase. Created for traffic-heavy regions in China, the Audi Urbansphere is the last member of the so-called Sphere family, designed to act as a third living space - between home and office - where occupants can choose to work or sit back during traffic.

Elsewhere, Ken Block's incredible Audi S1 e-tron quattro Hoonitron will stun the crowds at the Rolex Monterey Motorsports Reunion at Laguna Seca Raceway. Developed specifically for Block, the electric one-off draws design inspiration from the inimitable 1985 Sport quattro S1, which will also be on display. This is the very car Walter Rohrl set his Pikes Peak record in; 10 minutes and 48 seconds.

Audi will also display iconic racers alongside its most cutting-edge vehicle, the RS e-tron GT. 1980s racing legends, such as the Group B Audi quattro A2, SCCR Trans Am, and 90 quattro IMSA GTO are all rock stars in the Audi hall of fame. All utilize the legendary five-cylinder layout - still used in the glorious RS3 - and all dominated their respective motorsport activities.

From the outside, they couldn't be more different from the RS e-tron GT. All of them have an insatiable thirst for fuel, and turn gasoline into a soulful noise and exhaust pops and bangs. The electric newbie, on the other hand, is civilized and silent and doesn't have a stirring exhaust note.

But there is something that connects these vehicles. Despite taking different routes, all four were designed to thrill and excite, while being as fast as possible. The range-topping Audi EV may rely on batteries for its almighty pace, but with up to 637 horsepower, it's a massively exciting car to drive. Things are changing at Audi; the company aims to be all-electric in the coming years, but it seems its commitment to performance remains. 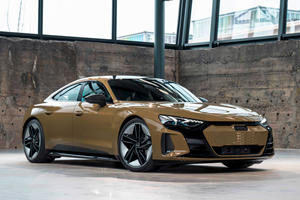