Audi Celebrates Its Past, Present, And Future In The Perfect Way

This is the funnest/best car commercial/short film you'll see this year.

Car commercials can often be boring, but there are a few that held our attention recently. A few months ago, Toyota poked fun at conventional car commercials with a tongue-in-cheek ad campaign for the GR Supra, culminating with an epic jump stunt. While car commercials tend to be serious, Toyota's campaign was refreshingly fun, silly, and lighthearted.

Audi has taken a similar approach with its new 'Led Balloon' short film. On the surface, it's an advertisement for the e-tron Sportback and Q8, but the film also serves as a fun celebration of Audi's past, present, and future.

Audi wants us to reflect on the past and embrace the future, but still enjoy the present. To illustrate this, the film starts with a businessman driving home in an Audi e-tron Sportback after a long day at work consumed by his thoughts.

Doug Demuro shows up in his 1994 Audi RS2 Avant, while historic models such as 1919 Audi Type C Alpensieger, 1975 Audi 50 LS, and 1984 Audi Sport Quattro also make cameo appearances. For motorsport fans, the legendary 1985 Audi Quattro S1 Group B rally car joins the action along with a 1988 Audi 200 Trans Am and 1989 Audi 90 IMSA GTO. Motorsport legends Walter Rohrl, Hurley Haywood, Tom Kristensen, and Hans-Joachin Stuck even join the water balloon battle. Looking ahead to the future, the film ends with a group shot of recent concept cars like the AI:Trail and AI:ME.

This is easily one of the best films Audi has made in a long time. Be sure to stick around until the end to watch some behind-the-scenes footage and bloopers. 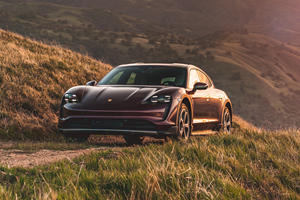