Audi Confirms RS5 Cabrio for the US

Alongside the US debut of the updated R8, Audi has confirmed that the RS5 Cabriolet will be making its way to the Detroit Auto Show.

With its RS line of performance vehicles, Audi offers some serious metal to challenge the likes of Mercedes AMG and BMW's M models. The trouble for American buyers is that few of those RS models are sold in the United States. But that's about to change. While the RS4, RS6 and TTRS are kept away from these shores, the RS5 coupe stands as the sole RS model available here. But Audi of America has just announced that it's about to get some company in the form of the RS5 Cabriolet.

Combining the best elements of the A5 convertible and the RS5 coupe, the RS5 Cabriolet was revealed for overseas markets but has now been confirmed for US launch at the Detroit Auto Show. In the nose sits a 4.2-liter V8 with direct injection to deliver 450 horsepower and 317 lb-ft of torque to all four wheels through a seven-speed dual-clutch transmission for a 4.9-second 0-60 time and a 174mph top speed with the wind in your hair. Quattro all-wheel drive with torque vectoring and a center differential help get the power down, shifting up to 70 percent of available power to the front wheels and up to 85% to the rear depending on conditions.

That's the kind of traction that can help keep a vehicle as powerful and heavy as the RS5 convertible on the straight and narrow, weighing in as it does at 4,400 lbs thanks to its convertible roof mechanism and extra body reinforcement. US pricing has yet to be announced, but extrapolating from the RS5 coupe's $68,900 sticker price, and the premiums the A5 and S5 cabrios fetch over their respective coupe counterparts, we figure the RS5 Cabriolet will be pushing $77,000 in US showrooms. That's a good ten grand dearer than the BMW M3 convertible, but still far shy of the M6 convertible's whopping $114,650 MSRP. 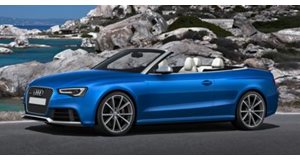