But the first concept will debut this year.

Audi is officially the Volkswagen Group's technology leader and that honor brings great responsibility. Markus Duesmann, the luxury brand's CEO, won't accept failure and is so far pleased with what's been accomplished. We already knew the existence of the super-secret Project Artemis, the architectural basis for a highly automated electric vehicle originally due in 2024.

Aimed directly at the Tesla Model S and upcoming Mercedes-Benz EQE and EQS, Artemis promises to be a significant technological leap forward in every major category, including batteries, automation, and overall design. The platform is expected to produce more than one vehicle. However, Duesmann has now confirmed to Germany's Automobilwoche that the first series-production model has been delayed by one year.

Now due to hit the road in 2025, Artemis (probably not the final name) will be unveiled at the end of 2024. Duesmann claims the project's many advanced technologies are what's causing the slight delay, though this isn't necessarily a bad thing.

"It is important to us that the car becomes a giant leap, a very big technological leap," the CEO said. "This car is the technology leader for a whole range of vehicles." Everything needs to be done right from the onset and there's no room for error. However, Duesmann confirmed we will be seeing the first Artemis concept sometime later this year. The plan is to reveal it at the Munich Motor Show in September.

Duesmann was also questioned regarding the just-announced cessation of Audi's internal combustion engine development. Core models like the A4, A6, and Q5 "will be offering combustion engines for a while. The next generation of these three series will definitely have combustion engines, including many plug-in and mild hybrids."

It'll be a gradual but steady switch to a fully battery-electric lineup. Eventually, all of the VW Group's EVs will utilize a common architecture, called the Scalable Systems Platform (SSP). Some advancements introduced with Project Artemis will surely be used for what will eventually be a tailpipe emissions-free automaker. 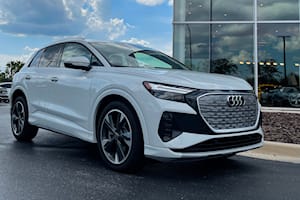