Audi SQ7 Gets Widebody Conversion With Over 500 HP

When it comes to the art of building sleeper cars, Audi has to rank highly on that list, mixing high performance with restrained styling. The German automaker has come out of its shell a bit of late, though, with dramatic offerings like the RS Q8 and the RS6 Avant. And now, the wizards at ABT Sportsline have added some RS-like theatre to the marque's SQ7 SUV.

The package applies to the European version of the SQ7, though. Unlike the one sold here, the Euro SQ7 is fitted with a 4.0-liter V8 TDI producing 429 horsepower and a monumental 664 lb-ft of torque. ABT thought that was a bit weedy, however, so they increased outputs to 503 hp and 715 lb-ft. That's a lot of grunt for a vehicle that's likely to spend most of its time trying to squeeze into shopping mall parking lots.

The stock diesel SQ7 will hit 62 mph in 4.8 seconds, so this is bound to be one seriously rapid SUV.

It's in the styling department that the ABT SQ7 makes even more of a statement, adding a lot more presence to the base SQ7's rather demure looks. A wider body comes courtesy of aggressively flared fenders, while front/rear skirt add-ons and bespoke quad exhaust outlets are further bold touches. The ABT sports wheels measure a massive 22-inches and can be had in three designs, including either gloss or matte black.

What makes ABT special is that customers aren't limited to the tuner's final specification; rather, they can configure their vehicles as if they would when ordering from any typical automaker. So, for instance, a 'slim kit' version of the SQ7 without the wing extensions is available, while a carbon fiber ABT rear spoiler can be equipped.

Newly introduced interior appointments include ABT dashboard covers and carbon trim on the seats. Even the start-stop button can be customized with an illuminated logo. Like the exterior, the cabin environment is all aggressive black, with generous use of carbon fiber trim, even extending to the trim surrounding the electric seat adjusters.

Overall, we think ABT has done a great job of injecting the SQ7 with more visual punch without going overboard; even the ABT badging on the wheels and front grille has been subtly incorporated. We'd love to see an ABT version of the USA-spec SQ7, which uses a 4.0-liter twin-turbo V8 engine churning out 500 horses - with a meaty exhaust note added to the mix, that would be some SUV. 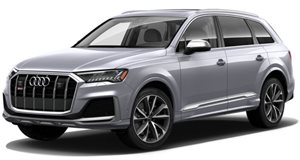 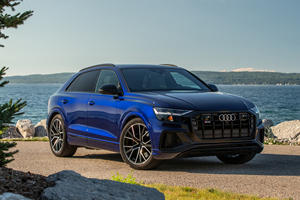 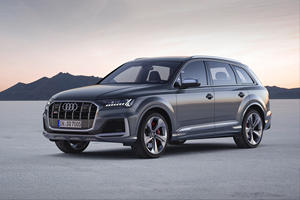 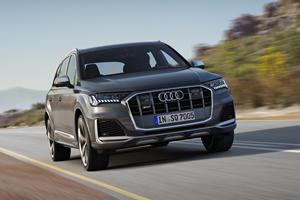