A public debut isn't expected until the Paris Auto Show later this year.

As we've seen in recent spy shots, Audi is preparing to give the TT a mid-cycle facelift to keep the current model fresh. We weren't expecting it to break cover until later this year as a public debut isn't expected to happen until the Paris Auto Show in October, but these leaked images suggest the reveal will be sooner rather than later.

Low-res images posted on Instagram by tts_freunde.de and new photos of the front and rear fascia sent by our spy photographers show the TTS variant completely undisguised. On first glance, it looks largely the same as the current model, but take a closer look and you can spot some aggressive cues inspired by the range-topping TT RS model.

At the front, the 2019 TTS features large air intakes with contrasting silver accents and the grille insert has been replaced with oval-shaped slats. Finished in bright blue, the TTS shown in the leaked image is riding on a new set of wheels and has silver accents under the side skirts. The rear also looks more aggressive thanks to new air vents located below the taillights. There's also a redesigned bumper and an enlarged diffuser.

Under the hood, the facelifted 2019 Audi TTS will most likely retain the current model's 2.0-liter four-cylinder engine. There's a chance Audi could add a few more ponies, so we can probably expect the facelifted model to pack more than 305 hp and 280 lb-ft. The 0-62 mph should take roughly 4.5 seconds. Since photos of the production model have now leaked, an official online reveal of the 2019 Audi TTS should be imminent before its public debut later this year. 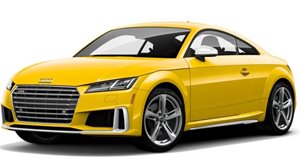