Audi's new Porsche Panamera rival will be revealed on October 19.

After revealing its flagship A8 luxury sedan a few months ago, Audi is ready to lift the wraps off its new next-generation A7 Sportback sibling this week to rival the likes of the Porsche Panamera, BMW 6 Series Gran Coupe and the all-new Mercedes-Benz CLS. Ahead of its reveal, Audi has released a darkened teaser image of the new sporty A7 on social media that partially reveals its swooping silhouette and familiar fastback-style rear-end. While little else is shown, it seems likely to take some of its styling cues from the A8.

Expect the front fascia and rear taillights to bear some similarities to Audi's flagship luxury sedan. In terms of powertrains, we can probably expect a variety of V6 and V8 engine options, and could possibly adopt the A8's 48-volt mild hybrid system too. At the top of the range will be the high performance RS7 model packing a 4.0-liter V8 with a rumored output of 650 hp. If that's not enough, Audi is also apparently planning to unleash a hybrid RS7 that uses the Porsche Panamera Turbo S E-hybrid's electric motor to generate a combined output of 700 hp. Audi also boldly claimed that the A8 will be the first production car fitted with Level 3 semi-autonomous driving technology ahead of Tesla and Mercedes-Benz.

This is thanks to its AI traffic jam pilot that can take over driving in slow-moving traffic at speeds up to 37.3 mph, so it seems likely that the A7 will pack similar tech as well. More details will be revealed in just a matter of days, as Audi will be premiering the new A7 Sportback at a reveal event in Munich on October 19. There's also a strong chance it will make its public debut at the upcoming Los Angeles Motor Show on December 1. 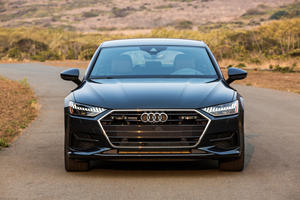