Jaguar's historic racer could sell for over $7 million.

Jaguar has built some terrific track-focused sports cars over the years, from the XKR-S to the XE SV Project 8 and the current F-Type SVR. Things were different back in the 1950s, however, when the Jaguar D-Type was a true race car for the road. Introduced in 1954, the D-Type famously won the 24 Hours of Le Mans for three consecutive years between 1955 and 1957.

Only 17 Jaguar D-Type works race cars were built including 11 "long-nose" variants, while there were also 54 "short-nose" customer race cars. Jaguar also used the chassis to build the XKSS road car. Unfortunately, production of the D-Type and XKSS was cut short when a fire erupted at Jaguar's factory in Coventry, UK, destroying five D-Types. This month, RM Sotheby's will be auctioning one of the surviving D-Types that was owned by none other than Bernie Ecclestone.

This particular D-Type was delivered in 1955 Henlys of Manchester, England. It instantly stands out thanks to its striking red exterior and matching interior. While most D-Types were painted in British Racing Green, only two or three were finished in red, making this example even rarer. It's believed the livery was chosen by Jaguar to enter the Italian privateer racing market. Ecclestone held onto his D-Type after Henlys failed to find a buyer. He then sold it for £3,500 ($4,763 at today's exchange rates) to racing driver Peter Blond, who became its first private owner.

He entered the car in club races at Snetterton, achieving second and first place finishes 1956. It also raced at Aintree, Silverstone, Oulton Park, and Goodwood during the 1956 and 1957 seasons. Blond sold the car in 1957 to racing driver Jonathan Sieff, who continued to race the car with Blond. It then changed hands several times and continued to race in the 1960s and 1970s.

It was even owned by the manager of Led Zepplin before being sold to an American car collector in 1982, who held onto it until 1996. Its current owner has kept hold of it since 2008. One owner had the D-Type repainted in British Racing Green, but it's since been restored to its original factory red specification. It was also initially built with a narrow windshield and no tailfin behind the headrest but was later fitted with a period-correct full-width windshield and distinctive tailfin.

Power is sourced from a 3.4-liter dry-sump XK engine generating 245 horsepower, mated to a four-speed transmission. RM Sotheby's expects Jaguar's historic racecar to fetch between $5,750,000 and $7,500,000 at its upcoming Arizona auction. This isn't the first time Ecclestone's D-Type has been listed for sale, as it also crossed the auction block back in 2018. Back then, it was expected to sell for around $10-$12 million, so it's lost some of its value. 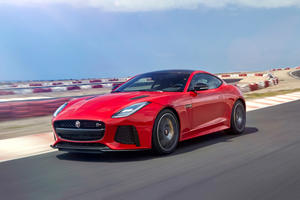