The new President has already signed the executive order.

President Joe Biden isn't wasting any time after taking the oath of office last week. Yesterday, he signed the "Buy American" executive order, an extension of the 1933 act bearing the same name. This initiative directs all government agencies to increase requirements about purchasing products and other services from US workers and businesses. It also aims to reduce bureaucratic red tape by creating a position in the Office of Management and Budget solely responsible for carrying out the order.

As part of this order, Biden also announced plans to replace the gas-powered federal vehicle fleet with electric vehicles. And those EVs must be built in the US by American workers.

"The federal government also owns an enormous fleet of vehicles, which we're going to replace with clean electric vehicles made right here in America, by American workers," Biden said. Electrifying the fleet, according to Biden, will create jobs as the "the largest mobilization of public investment in procurement infrastructure and R&D since World War Two."

However, Biden's plan doesn't specify whether plug-in hybrids are included. In 2019, the fleet had a total of 645,000 vehicles. The United Auto Workers and America's biggest automakers, specifically GM and Ford, couldn't be happier with Biden's announcement. Both have committed to an all-electric future and continue to invest billions in battery technologies and necessary infrastructure.

The Ford Mustang Mach-E is only the start of the Blue Oval's EV blitz, and next month a heavily updated Chevy Bolt EV will be unveiled alongside the Bolt EUV. The Cadillac Lyriq is due in 2022. And speaking of Cadillac, does Biden's order mean the next Cadillac presidential limo, affectionately known as "The Beast," will also go all-electric? The order made no specific reference to this but it's safe to assume this will be the case. Lead by example.

The fleet's electrification won't happen overnight, or even in a year. Biden did not state how long the transition will take, but given the sheer amount of vehicles involved, it'll likely require a few years. 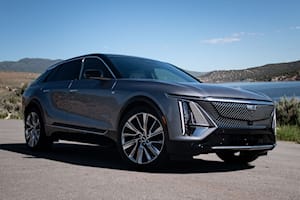