Jaguar tried to pull off a case of badge engineering a la Cadillac Cimarron style.

I know what you're thinking, you're thinking that the X-Type had a nine-year production run, during which it Jaguar's top-selling model for every one of those years, it couldn't possibly have been a misstep. You may also be thinking that if I'm doing a piece about badge engineering gone too far, the Cadillac Cimarron is the far more iconic. These are valid points, but there are a couple of very good reasons to call the X-Type a bigger misstep.

The first of these is simple economics, the Ford years were very dark ones for Jaguar, and being their best-selling model doesn't actually mean selling well. In truth, the X-Type failed to meet sales goals by about the same margin as the Cimarron. Second, and most important, is that the X-Type was built by people who had heard of the Cimarron. They knew what a disaster this kind of badge engineering would lead to and yet they still did it anyway. The X-Type was essentially a Ford in a badly made Jaguar costume. It was built on the platform that used to be used for the Ford Contour and Mercury Mystique, as well as the Mondeo overseas.

The cabin was littered with switches and other components from the Ford parts bin, and the Jaguar-ish front fascia did little to reassure us that we were looking at a genuine Jag. That said, the X-Type was largely well-received by the automotive press when it was launched in 2001, and sales reached 50,000 units in 2003. Of course, that 50,000 was only half of the 100,000 unit projection which Ford had made for the X-Type, and by 2005, sales had sunk to just under 11,000. Jaguar had actually made something of an effort to distinguish the X-Type from its cousin at Ford, certainly more effort than Cadillac had put into the Cimarron.

The styling wasn't spectacular, and you could still definitely see the Contour/Mondeo in it, but even at a glance, it was clearly something different from its platform mates. Mechanically speaking, it tended to be the Jaguar-specific parts which failed the most. It seemed as though these parts were designed as an afterthought, as though they realized at the last minute that a few styling flourishes weren't going to be enough to call it a different model. Probably the most notorious of these was the all-wheel-drive system, which was almost comically prone to failure. The engines were a bit of a problem as well.

The 2.5- and 3.0-liter AJ V6 engines were classified as Jaguar-made engines, although this isn't strictly true. They were basically Ford Duratec engines, with which Jaguar had fiddled a bit, including the addition of variable valve timing. This was a good thing in theory, but again, there were problems. The engines had a tendency to seize, and although it didn't happen quite as frequently as problems with the AWD system, it's still not exactly a desirable effect. Jaguar had presumably been emboldened by the relative success of the S-Type a few years before the debut of the X-Type.

This was a car which also shared a platform, but here it wasn't nearly so much of a problem. The platform was designed with the idea that Jaguar would use it in mind. The non-Jag which used it was the Lincoln LS, which had the advantages of being a rarer and nicer car than the Contour, as well as being the most interesting car in Lincoln's lineup at the time. Exciting performance options were offered, and the styling, though somewhat controversial, was more distinctly Jaguar. The message this seem to have sent to Jaguar was simply that platform sharing was ok all of the time no matter what.

Perhaps another factor was that X-Type was an entry-level vehicle, and would therefore be competing with the Audi A4. The BMW 3-Series would obviously be its chief rival, but Audi entry-level model has been quite successful as well, and it's one that shares a platform with a cheaper car. But just like the LS/S-Type platform, the A4/Passat platform was designed to accommodate both cars, and it's probably more accurate to say that the Passat shares a platform with a more expensive car, rather than the other way around. The X-Type probably would have failed even without the reliability issues, after all, Jaguars (and British cars in general) were notorious for reliability problems.

That was the case for decades well before the X-Type ever came along, but they kept selling cars. No, the problem with the X-Type was that the badge engineering was just too obvious. You were clearly being sold a much cheaper car with a few gimmicks to justify the bigger price tag. The public just didn't fall for it, just as they hadn't fallen for the Cimarron, and that's something Jaguar should have known would happen. It's amazing that the X-Type made it to production, but I get the feeling that it won't be the last of this type of mistake to be made by an automaker. 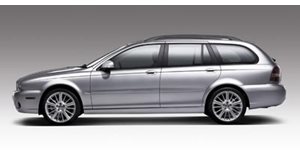