Wearing very minimal camouflage, this is the clearest look we've seen yet of the upcoming 3 Series Gran Turismo.

Despite public perception to the contrary, BMW maintains that the 5 Series GT was a solid seller. On that basis, it is moving ahead with development of a scaled-down 3 Series variant. As the car approaches its public release, BMW has reduced the typically heavy camo on this prototype, giving us a glimpse at the vehicle's overall shape that follows in the footsteps of its larger sibling. The 3 Series GT is aimed at buyers looking for a 3 Series but with wagon utility and a fastback shape.

The roofline isn't the only difference from the existing F30-generation 3 Series: the GT model bears a wider, more svelte twin-kidney grille and headlamp units that sit higher up, connected visually to the grille via the 3er's characteristic "whiskers". Expect the 3 Series GT to come with the same array of engines found in the 3 Series sedan, including four- and six-cylinder gasoline and diesel units mated to an eight-speed automatic transmission. If BMW plans to release the 3 Series GT in the US, then the 2013 Detroit Auto Show is where it will most likely debut. If not, we'll be looking for it in Geneva. 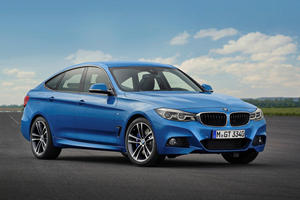