When will it arrive?

Earlier this year, BMW revealed the coupe and convertible variants of its two-door 4 Series, as well as the fixed-roof version of the performance-oriented M4. Only one variant remains in development... the 2021 BMW 4 Series Gran Coupe. For those who have forgotten, the 4 Series Gran Coupe is a four-door variant that also bundles a hidden hatchback, differentiating it from the standard 3 Series.

We last spotted the next-generation 4 Gran Coupe on the back of a flatbed truck, but now our photographers have captured the car driving under its own power. There are some notable changes on this test mule since the last time we saw the car.

In fact, the test mule looks remarkably like the all-electric i4 model that we spotted last month. That's because the 4 Series GC and the i4 will share a body and be built on the same production line. BMW's new CLAR modular architecture can accommodate gas, diesel, hybrid, and electric drivetrains, all of which will be in play for the 4 GC and the i4. In the United States, we expect the Gran Coupe to use the same engines found in the other 4 Series models.

As 2020 is already coming to a close, we probably won't see the new 4 Series Gran Coupe until 2021. When it arrives, it will enter battle directly against the Audi A5/S5 Sportback, which also includes a stylish hatchback design.

As with the previous generation, we expect the Gran Coupe to be priced near the standard 4 Series Coupe at around $45,000.

Model Overview
2021 Audi A5 Sportback Review: Style Without The Sacrifice 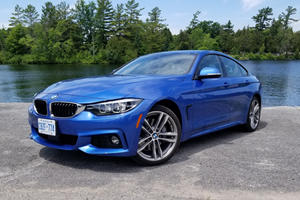