BMW 8 Series Gran Coupe Is Getting A Fresh New Face

One of BMW's best-looking models is about to get better.

BMW has faced a lot of criticism over its controversial design direction applied to the new 4 Series, M4, and M3. On the other side of the spectrum, we have the BMW 8 Series Gran Coupe, arguably one of the best-looking BMWs in a long time that looks beautiful from every angle.

You wouldn't think there's much room for improvement, but BMW is making some design changes that make the gorgeous grand tourer look even more dashing. Our spies have caught BMW testing an 8 Series Gran Coupe prototype with camouflage applied to the front and rear as part of an upcoming refresh.

Don't expect any drastic changes, however. At the front, the camouflage is covering up a redesigned front bumper, grille, and headlights. At first glance, the headlights appear to look identical to the current model's but a closer inspection reveals they are slightly slimmer, giving the 8 Series Gran Coupe an even more fetching face. At the back, minor changes have been applied to the bumper and the taillights have been updated with new graphics. We don't get a look inside the cabin, but we aren't expecting any changes other than some software updates for the infotainment system.

Under the hood, the 8 Series Gran Coupe's engine options should carry over. The current car is offered with a turbocharged 3.0-liter inline-six engine producing 335 hp and 368 lb-ft of torque or a twin-turbo 4.4-liter V8 rated at 523 hp and 553 lb-ft of torque. The former pairing may be updated with a 48-volt mild-hybrid system, however, as we've already seen in the updated M440i. BMW hasn't announced when the updated 8 Series will debut, but considering it's only been on sale since the 2019 model year we're expecting it to debut as a 2022 model year, meaning we may see it towards the end of this year. 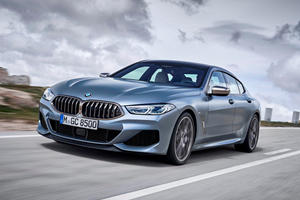