BMW Confirms The M4 We've Been Waiting For

This has been spotted more than once by our spy photographers. We always suspected it was coming but BMW had yet to confirm it. Until now. The BMW M4 CSL is expected to make its first appearance sometime later this year following the E46 M3 CSL's 13-year market absence. Back then, the 4 Series didn't exist.

The return of this lightweight and more powerful coupe is a pretty big deal and the German automaker has just very quietly acknowledged it. Hidden deep inside its end-of-year sales figures press release is the following: "an exclusive special-edition model based on the new BMW M4 Coupe" is on the way.

Now, this is not a direct acknowledgment of the M4 CSL's existence but now-former BMW M boss Markus Flasch stated not long ago that the model is an "open secret." That's good enough for us. Specific details are still being kept under wraps but it's been strongly hinted the M4 CSL's rear seats will be removed to help reduce excess weight. Flasch also revealed a "triple-digit range" weight loss range is being targeted. Figure at least 220 or so pounds will be shaved away.

Additional creature comforts set to be removed include electric seats and parking sensors. A more powerful version of the M4's 3.0-liter twin-turbocharged inline-six engine will be found under the hood. Expect around 540-550 horsepower.

However, sources indicate a six-speed manual gearbox is not in the mix. Instead, the M4 CSL will receive the eight-speed automatic transmission only though power will be routed to the rear wheels only. The xDrive all-wheel drive system will not be offered. Special forged wheels, unique badging, and a numbered plaque are also said to be on hand. Another recent report claims this special M4 could be a special 50th-anniversary model to celebrate the establishment of the M division. If so, it'd be based on the M4 CSL but with one major difference: a six-speed manual.

Production, as expected, will be quite limited. Only 1,000 examples are planned for global distribution. There's a decent chance a majority will be sent to the US. Pricing also remains unknown but expect the M4 CSL to cost no less than $100,000. 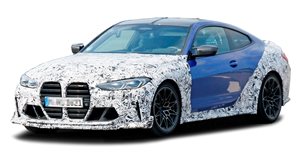