BMW i8 to Officially Debut at Frankfurt

Nearly four years after it appeared in concept form, the production BMW i8 supercar will officially debut at Frankfurt next month.

The next supercar reveal is upon us, and it will happen at the Frankfurt Motor Show next month. That new supercar will be the BMW i8, a hybrid vehicle that will certainly be more appealing than its smaller sibling, the i3 hatchback. There have been numerous spy shots of i8 test mules on the road over the past year, and it's clear the final production version won't look all that much different than the concept. Believe it or not, that concept, officially called the Vision EfficientDynamics concept, premiered almost four years ago.

At the time, the very thought of building a supercar with hybrid technologies sounded unusual. But since then, the LaFerrari and the McLaren P1 have premiered while the Porsche 918 Spyder and Acura NSX are coming soon. The i8 will likely be powered by a 1.5-liter three-cylinder engine that moves the rear wheels. It will be paired to an electric motor that moves the front wheels. All told, combined output will be in the neighborhood of nearly 400 horsepower and 400 lb-ft of torque. Like the i3, the i8 will also boast lots of carbon fiber and other forms of lightweight construction to keep its total weight just over 3,100 lbs. and will go from 0-62 mph in less than five seconds. 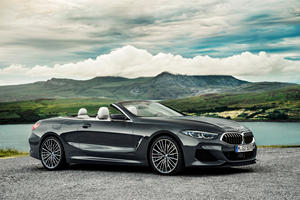