Yes, we think a proper replacement for the 1 Series M Coupe is in order.

Only a couple of weeks ago did BMW confirm that they have completed production of their adored 1 Series M Coupe. We knew that it was a limited-run model, but it still hurt a bit knowing that it's officially out of production. Fortunately, it was clear to BMW that the car was a major success. Now that there's a newly redesigned 1-Series hitting showrooms, it only makes sense for them to consider an eventual 1M replacement.

Fortunately, the good people over at Car Magazine recently took this spy video of the production M135i out testing on the Nurburgring. This three-door hatch is rumored to have all-wheel-drive and more than 300hp produced by a twin turbo three-liter inline-six engine.

Originally displayed as a concept at the Geneva Motor Show last month, this video makes it clear that the M135i will make production. The only question left is whether BMW will bring it stateside. Since the 1-Series hatch has never been sold in the U.S. market, the odds of the M135i crossing the Atlantic aren't exactly the best. 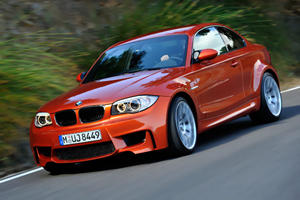